Delivery : Instant Email Delivery
Bernardo Faria Battle Tested Half Guard DVDRip is digital course. We will delivery via your email with download links. You can online access with smart device or download to personal computer. 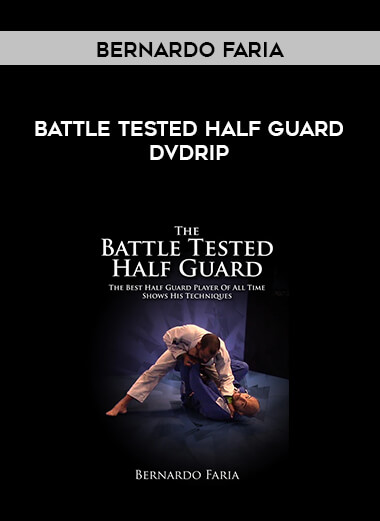 Learn The Easiest And Highest Percentage Sweep In BJJ, Which You Can Use To Sweep Bigger, Stronger And More Athletic Opponents With Ease

The “Michael Jordan Of Half Guard”, Bernardo Faria Shows You Every Detail Of His 30+ Best Half Guard Sweeps & He Lets You Into His Head As He Narrates His Sparring Sessions. You’ll Know Just What He’s Thinking When You Face The Same Challenges In The Gym.

Bernardo Faria probably has a lot more in common with you than he has with the athletic freaks that you picture winning the Jiu Jitsu World Championships.  He is friendly to everyone, he snorts when he laughs and he is laughing almost all of the time, and he is really into using his computer; not exactly the typical picture of a “tough guy..”

When he gets to the gym he isn’t very good at doing the warmups..  He can’t really do a cartwheel and if you were watching him shrimp or roll you wouldn’t say “wow, I bet that guy is a killer!”   He’s just not that fluid.  But when it comes time to slap hands and start rolling or get on the mat at the World Championships – everything changes.   Bernardo’s lack of elite athletic ability doesn’t really matter – because he has a much better system for sweeping than his opponents.  While we will never say that his or anyone’s moves can’t be stopped, we can comfortably say that they haven’t been stopped!

The Position That Hasn’t Been Stopped

Bernardo likes to pull into half guard – which is very easy to get to against almost any opponent: they are happy to give it to you, they figure they are halfway past your guard!  What they don’t realize is that they are also halfway swept.  This isn’t an area where most BJJ guys spend a ton of time, so if you practice his system you will have a huge advantage over your opponent who doesn’t – regardless of his athletic ability or rank.

He Has Two Positions From Under There…

Once you know the difference between these 2 positions and when to use them you will have your opponent into deep water that he doesn’t know how to negotiate.  Knowing Bernardo’s system is almost an unfair advantage.

Will This Sweep Work Against Anyone?

To answer your question quite simply:  Yes.

This sweep has worked against everyone Bernardo has faced at the highest levels:

So What is on The Battle Tested Half Guard DVD?

This DVD set is packed with over 30 Video Lessons with Half Guards that will absolutely transform your game.

It doesn’t matter what belt your opponent is or how athletic they are. With Bernardo Faria’s Half Guards you are good and they suck… it’s over.

How To Pull Half Guard

Fake Single To Pull Half Guard

Pulling Half Guard From Knees With Cross Arm

Pulling Half Guard From Knees

Counter To When Opponent Kicks Out Of Single Leg Half

Lapel Behind The Leg

Single Leg Sweep When Opponent Has Knee On Chest

Half Guard Sweep From Knee Cut

Push Him Away From Knee Cut

Tips For Getting Deep Half

Push Away Deep Half Setup

Deep Half To Single Leg

Deep Half To Half Deep Half

Turkish Get Up Against Deep Pass

Defending The Kimura And Chokes From Deep Half

Throw Away The Trash When oponent Stands Up

Half Deep Half Guard Sweep

Half Deep Half Guard Sweep Without Lapel

Setting Up Single Of Deep Half When Opponent Switches Base

Faria Sweep By Lifting OVer The Head

Deep Half Guard From Closed Guard

This is like a 4 hour private lesson from the best in history.

This dvd is unlike any other on the market because in addition to the technique, Bernardo has videotaped himself sparring from half guard with a bunch of very tough black belts and brown belts including 7x Brazilian National Champion Fernando Reis.

These guys put Bernardo in some tough spots – they knew he was only sparring him from half guard and they are at least as tough as the guys you will be fighting in class.

Bernardo tells you what he is thinking in every second of every roll – his setups, how he stays out of traps, what he is looking for.  When you start trying the techniques, you will watch this segment over and over and over again as you see Bernardo solving the exact same problems that you have in class. $19.00
Delivery : Instant Email Delivery Priit Mihkelson - Protecting & Generating Dynamic Offense From The Turtle is digital course. We will delivery via your email with download links. You can online access with smart device or download to personal computer.
Add to wishlist
Enroll Course
Quick view $19.00
Delivery : Instant Email Delivery Libre Fighting System - Skill Set 1 to 4 is digital course. We will delivery via your email with download links. You can online access with smart device or download to personal computer.
Add to wishlist
Enroll Course
Quick view