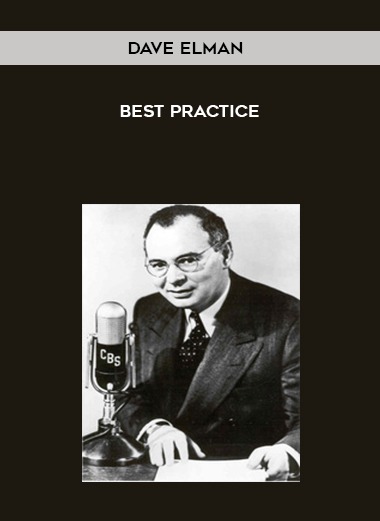 Learn the long lost techniques of the greatest hypnotist of the 20th century.

August 2010’s launch of the Best Practices product at the convention of the National Guild of Hypnotists was HUGE! It was our best opening day ever and initial reviews are VERY promising. Experienced hypnotists are saying these long forgotten techniques are priceless. This set of DVDs will be a “must have” for anyone interested in doing true, effective hypnotherapy.

In this 4-DVD set you will learn about:

“Having watched the “Best Practices of Dave Elman” DVD set I must say that they are fantastic! There is something there for everyone whether you’re a novice, a practicing hypnotist looking to learn more about Dave’s work or a regression pro’. Little things sometimes make a massive difference and the small investment in this set could reap huge returns for your hypnosis business! I recommend the DVD set highly (and I don’t recommend products very often!) by  Dave Sabat DCH DHP.”

“I am learning so much from your video’s and the details that you teach. You have inspired me tremendously and I am getting fantastic results from the induction and thanks to you I am realizing the absolute importance of the minor details.”- Chet Payne

Who was Dave Elman?

They have equal stature.

This is surprising because Erickson published dozens of books and papers on hypnosis and was actively promoted by his followers who wrote dozens of books about Erickson, but Elman published only one book, Findings in Hypnosis (later published as Hypnotherapy). Why is Dave Elman held in such high esteem? His techniques are that good!

Erickson’s inductions could take a very long time, but Elman would place a subject into deep trance in less than a minute!

Elman published only one book, but that ONE book had such an impact that many consider Elman to be the greatest hypnotist of all time. There is very little information out there about Dave Elman, but this new DVD is going to change all that!

I purchased the CD’s on the Dave Elman HypnoAnalysis recordings and they are brilliant! I’m so glad that you and Larry, Don and  his family have continued to keep Dave’s work in the forefront of hypnosis. It seems that everyone claims to have “new” techniques and really they are just repackaged versions of what Dave Elman did and established. I’ve yet to really find anything new, and hold the book “Hypnotherapy” as the Bible of Hypnosis!   Have an amazing week! Sincerely, Doug MacCraw – BCH, CI

He was inspired to research hypnosis because his father, dying of cancer, received pain relief from hypnosis which enabled him to play with Dave one last time.

Dave toured with a number of vaudeville troops, serving as a musician, a comedian, a bit player, and in several other capacities.

It was in this period that he began using the name Dave Elman because the extra three letters of Kopelman prevented getting better billing on theater marquees. In this period, he also was billed as “The World’s Youngest and Fastest Hypnotist” because his research in hypnosis after his father’s death had led him to discover means of hypnotizing subjects in mere seconds. This was an important discovery in the fast-paced world of the vaudeville circuit where slow acts bored audiences, and hypnotists were fired for that. It was several decades later that Dave realized that this speed of hypnotic induction also made hypnosis useful in medicine.

In the 1920s, Dave worked as a songwriter for W. C. Handy while still also playing as a jazz musician. This led him into radio, his primary career from the mid-1920s into the early 1950s. In 1937, he created the program “Hobby Lobby” which was carried coast-to-coast for over a decade—an unusual achievement for that era. He also created “War Bond Auction,” a program which generated very large amounts of money for the war effort. He received many awards for this from the Government.

In 1949, he demonstrated his rapid induction methods and knowledge of pain control to doctor friends. As a result, he was asked to provide a course on hypnosis to physicians and dentists. He insisted that he not practice medicine but only teach the techniques of hypnosis. His students often researched further medical applications and reported these back to be described in the course. His courses on hypnosis taught more physicians this subject than any other teacher before or since.[4] The audio recordings of the classes and his book Hypnotherapy are regarded as classics in the field of Medical Hypnosis.          (Courtesy of his son, H. L. Elman)

Have you ever worked with a client who suffers with chronic pain?

These lost techniques will give you the ability to relieve discomfort almost immediately from clients who have been unable to manage their pain using medication. Learn how Dave Elman was enormously successful in relieving migraine headaches using age regression and superficial suggestion techniques.

Unfortunately, the hypnotic seal is coming back into hypnosis again. This is a means by which the hypnotist ensures that the subject can not be hypnotized by another hypnotist. It is unethical and unwise, not to mention unfair to the subject, but there are some hypnotists out there who are employing the seal.

The good news is that the seal is no match for a hypnotist who knows the Dave Elman technique for breaking ANY seal. This technique, as well as another highly effective technique, are both taught in the Best Practices product.

The Esdaile State , otherwise known as the“hypnotic coma,” was taught by Dave Elman so that his students could relieve pain, even cancer pain, in thousands of patients. It is an extremely deep hypnotic state that can be useful in many advanced techniques. Dave Elman was the first hypnotist to achieve the hypnotic coma by design during a class in Baltimore in 1952. Before that, the hypnotic coma was an oddity that occurred spontaneously in one out of ten thousand cases.  You will learn how to achieve this state “by design” using Dave Elman’s technique.

Some hypnotists have difficulty achieving deep trance in their subjects.

In this DVD set you will learn the simple yet elegant deepeningtechniques used by Dave Elman to achieve wonderfully deep trance states necessary for effective hypnoanalysis and hypnotherapy. When you see them you will wonder how they can be so effective… yet they are, and you will learn why they work so well.

Children can make such profound and rapid change in hypnotherapy, and this DVD set will show youhow to effectively hypnotize children.Sometimes the parent can be more difficult to deal with than the child, and you will learn how to work around this obstacle when it occurs. Have you ever wondered if it is possible to hypnotize a “bratty” child?  Well, it is, and you will learn how here.

The Dave Elman Induction is recognized world wide as one of the most effective hypnotic inductions ever developed.

Some say it is the most effective induction. But did you know that the Dave Elman Induction started out much differently than how it is usually done now? During a rare moment during the class, Dave Elman’s son Colonel Larry Elman demonstrates the now famous induction in its original form, and this demonstration was caught on video tape! The original form of the induction has not been seen in decades, but now you can see it and hear the reasoning behind the steps.  You will see history come alive!

What if you could learn the revolutionary, ground-breaking techniques of legendary hypnotist Dave Elman?

Could this knowledge turn around your practice?

What if you could take advantage of learning from Dave Elman’s sole surviving son who had taken his dad’s course three times?

What would this mean to your hypnosis practice to be able to expertly perform these techniques that produce profound change in clients?

We teamed with Hollywood film maker Dale Garner on this project. Dale Garner has more hypnosis experience than any other film maker in the world since he is also a certified hypnotist with the National Guild of Hypnotists!  Because of this, Garner knows exactly what shots to catch, what is important to the hypnosis student, and his productions are the best in the business.

…The Best Practices of Dave Elman DVD set of 4 is an important piece to have in every hypnotist’s library. It covers everything from instant inductions, to how to use hypnosis in emergency situations. It’s not just an interview type DVD it actually shows how to do each practice that is being talked about. It’s so interesting you won’t want it to be over! You can watch it again and again and learn something new every time! These DVD’s are a must have for me and should be for anyone that is involved in hypnosis professionally or as a hobby. Cindy Parker-Katz, CHT 101 Ways to Hypnotize Anyone by Steve G. Jones Introduction to Mesmerism and Quantum Magnetic Gaze by Marco Paret Paul Scheele – The Ultimate You Library of Paraliminals