Delivery : Instant Email Delivery
Boom Library Urban Europe 3D Surround Edition WAV is digital course. We will delivery via your email with download links. You can online access with smart device or download to personal computer. 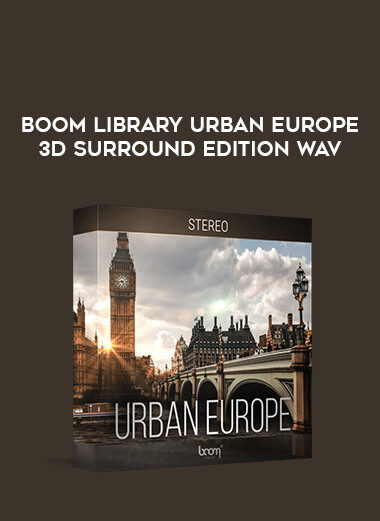 Strengthen your productions with characteristic, intimate and authentic European city ambiences including:

We recorded cities and towns in over 10 European countries to capture their unique character.

This collection is an essential addition to our URBAN USA 3D Surround library.

Enjoy Europe with its rich variety of sound palettes throughout all different countries from city to city.

The sounds come without much action in the foreground to provide a very clear and detailed acoustic image of each environment, giving you the perfect background noise layer to break the silence in your post production project.

The recorded locations vary from streets and restaurants over squares, harbors, markets, commercial areas, parks, and busy shopping areas to industrial zones and construction sites. This library can easily be used in stereo productions as well. Either choose the listening angle yourself or use the stereo version (included in 3D SURROUND).

URBAN EUROPE is a highly versatile ambience library that smoothly adapts to a wide range of applications.

It offers a large selection of generic ambiences to blend into many different contexts as well as specifically recognizable locations delivered with maximum authenticity.

Ambiences are an excellent tool to establish the mood of a scene, level, or location. With URBAN EUROPE, this becomes a simple and rewarding task: Choose from the large pool of well categorized ambiences available.

From ultra-silent to lively, confined to wide open, dry and close to reverberant – everything delivered in an immersive 3D audio format that’s also backward compatible.

To increase your mileage with the library even further, the average sound is 3-5 minutes long.

We visited and thoroughly recorded a huge variety of environments across various European cities, including the following:

SUITABLE FOR ANY SURROUND APPLICATION, EVEN AND ESPECIALLY IMMERSIVE AUDIO LIKE AURO 3D, DOLBY ATMOS, 360° VIDEOS AND VR

URBAN EUROPE is the fifth product of our famous new sound effect series 3D SURROUND. It continues a new era of surround sound FX libraries with unprecedented precision, spatial impression and clarity. 3D Surround delivers better results where conventional surround techniques reach their limits. This occurs especially, although not exclusively, in VR, where events must sound 100% convincing depending on the rotation and tilt of the user’s head. With our new 3D SURROUND series, you are ideally equipped for not only VR, but any other application that requires high-definition and crystal-clear surround sound.

WHAT IS SO SPECIAL ABOUT 3D SURROUND?

3D Surround adds a height layer as a third dimension compared to regular surround. The sound not only reaches the listener’s ear from the side, but also from above. This results in a much better localisation of the sound source and a much more immersive listening experience which makes it the perfect surround type for VR applications and Dolby Atmos.

RECORDED WITH THE MOST ADVANCED TECHNOLOGY