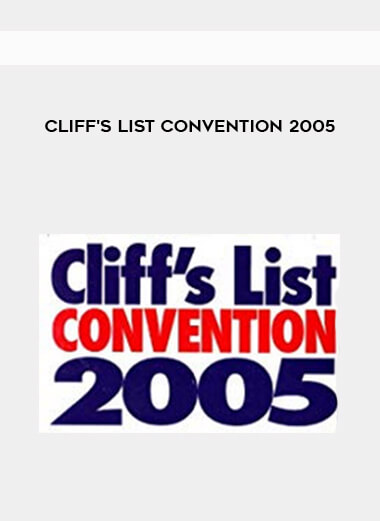 Way back, after the crust had cooled on the molten rock that was the beginning of the seduction movement, a fella by the name of Clifford began an exclusive email list. Exclusive to anyone who was interested in and wanted to learn the methods of seduction.

The list, Cliff’s List, is one of the centers of the seduction community, full of discussion and debate at the heart of this craft.

In late 2005 a convention was held in Montreal, Canada. Invited to talk were some of the worlds most renowned pickup artists, dating gurus and seduction experts. The Cliff’s List Convention 2005 DVDs are the result of this gathering.

The DVDs layout is in no particular order. Each speaker is introduced by a short interview on his (or her) take on seduction; how they got into it; their growth. In some cases interesting, in some cases boring.

Criticism has been attached to the Cliff’s List program, that it is little more than an opportunity for each of the invited guests to advertise their wares. On this point, I leap to the defense of the list convention by saying this; it absolutely is. The guys (Patti too, she is one of the guys) get up and give, for the most part, their best shit. With an hour to speak, we get a taster of their ideas and methods.

Maybe then, too many introductions. In some cases this is true, a lot of basic theory. But, some highlights for me. Sensei (Lance Mason of Pickup101) did an enlightening hour on kino. His presentation was full of practical techniques, useful applications and came over very well. Zan was his usual enlightening, eye-opening self. Tyler Durden gave an interesting and entertaining talk, somewhat covering the inner mix of emotions we all go through learning to get success with women.

David deAngelo and Mystery gave their usual, and were fine along with it. Of course, if you want to hear these guys speak, you have a choice of a number of other products (there were other Mystery Method guys at the conference though, overall Mystery Method was very strongly represented).

One of the real values in this product is the views of little known or unknown members of the seduction community. And whether you agree or disagree with their perspectives, it’s all on display for you. You might just uncover a gem of an idea that had passed you by or a piece of your own puzzle.

An appearance by Style is another notable point of these DVDs. He had become the famous face of the seduction community and took his stage opportunity to present some of his in-field material (here for instance was Style doing Style’s EV). The nice thing was that not all of his tricks came off, and that’s another point about in-field material, it shouldn’t matter.

OK, the low points. Bishop returned from the seduction wilderness to deliver a confused performance that didn’t really strike any chords with me. Brent, who otherwise has a sound philosophy and ideas, sounds muddled. As I write this review, the Cliff’s List Convention 2006 is in production, and if Brent is there I fully expect him to make a fine presentation. in the 2005 DVDs, however, he doesn’t present the strengths of his approach clearly as I know them (apart from a couple pieces of wisdom). For the discerning viewer there are some things to take issue with many of the speakers.

And the regular everyday stuff. Many of the experts gave the same stuff that we have heard them say again and again over the years. Again good intros, nothing more.

So the DVDs have some highs and some lows, and my examples in the review cover the briefest of brief snippets. But all in all you do get a bag load of info for your bucks. But the thing about a conglomeration like this is that you will get some great stuff that fits your particular slant and you will get some tripe.

Summary. The Cliff’s List Convention DVDs have the feeling of a couple dozen introductions to various different methods. A great many high points and the cream of guest speakers outline the basics of seduction methodology. So, is this the ultimate introduction to the game. Well, No. Far from it, it is amongst the better intermediate products out there. Guys who have learned skills and can cast a critical eye over the content, pick up the most from a set like this. Looking for a new direction, or some vast expertise (but not too deep) on a myriad of topics, look no further.