Delivery : Instant Email Delivery
Conquest of the Americas is digital course. We will delivery via your email with download links. You can online access with smart device or download to personal computer. 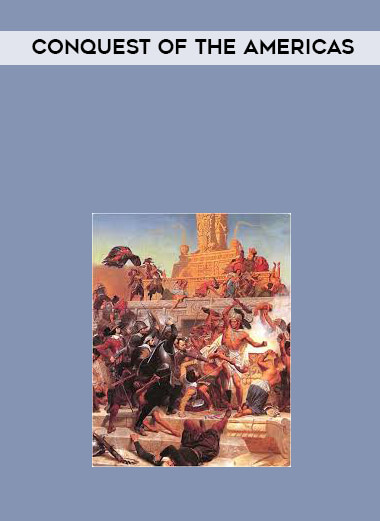 Salepage : Conquest of the Americas

Why was Christopher Columbus’s voyage to the Americas in 1492 arguably the most important event in the history of the world? Professor Marshall C. Eakin of Vanderbilt University argues that it gave birth to the distinct identity of the Americas today by creating a collision between three distinct peoples and cultures: European, African, and Native American.

As the inheritors of this legacy, some 500 years hence, we forget how radically the discovery of the Americas transformed the view of the world on both sides of the Atlantic.

A People Unknown, A Land Unmentioned

When Columbus completed his “enterprise of the Indies” he found a people unlike any he had ever known and a land unmentioned in any of the great touchstones of Western knowledge.

Animated by the great dynamic forces of the day, Christianity and commercial capitalism, the European world reacted to Columbus’s discovery with voyages of conquest-territorial, cultural, and spiritual.

For the native peoples of the Americas, the consequences were no less dramatic.

When Hernán Cortés arrived to conquer Mexico, the Aztecs feared he was a god, returned from exile to claim his ancient lands.

For all intents and purposes, he may well have been.

Within half a century, Old World germs and diseases had reduced native populations by as much as 90 percent.

The great empires of the Aztecs, Mayas, and Incas, which had developed over centuries, were undone in a matter of years.

The religious orders of the Dominicans, Franciscans, and Jesuits undertook to convert the native peoples to Christianity.

Finally, the engine of European capitalism, embodied in the great plantation estates and mining complexes in Mexico and Peru, transformed the day-to-day life of the native peoples.

This collision of cultures also had enormous consequences for the peoples of Africa. The transatlantic slave trade, the largest forced migration in human history, changed the lives of millions of Africans and initiated one of the most tragic chapters in the history of the Americas.

And yet, this course is no simple account of heroes and villains, or victors and victims. It is a dramatic, sweeping tale of the complex blending of three peoples into one.

Through Dr. Eakin’s thoughtful and detailed lectures, you understand how these three peoples formed completely new societies and cultures that were neither European, African, nor Indian. Instead, they were uniquely American.

History from Above and Below

What has been called “history from above,” or the study of heroic and elite figures that played a key role in shaping history

“History from below,” the story as told by the great majority of common people who experienced this history firsthand.

While Dr. Eakin readily identifies and shares his analysis and interpretation of events, he also generously showcases competing views, and you benefit enormously from the numerous works he cites for further study.

He delivers his evenhanded lectures with one eye on the latest academic research and the other on classic scholarship of the past and original sources.

Those sources include the famous Florentine Codex, a retelling of the Spanish conquest of Mexico by the people who experienced it. It was compiled by a Spanish priest in Nahuatl, the native language of the Aztec Indians.

The Old World and the New

Professor Eakin sets the table for this history of the Americas by examining these two worlds as they developed in isolation for thousands of years.

You discover the wondrous accomplishments of the three great Native American empires, the Aztecs, Incas, and Mayas. These sprawling empires mastered the domestication of crops and animals, as well as the control of water so necessary for a society to develop.

You learn how all three had complex religions, imperial ideologies, and impressive technological expertise:

The Maya had intricate calendrical systems based on knowledge of mathematics and astronomy that rivaled the achievements of the Old World.

The Incas administered, without a written language, an empire that stretched along most of the South American coast.

The Aztecs, like the Incas, built an enormous empire, conquering all of central Mexico from coast to coast as they sought more and more humans for the sacrifices their complex religion required.

When the conquistadors first encountered the breathtaking architectural achievements of these civilizations, they were awestruck. These were edifices that matched anything seen in the revered world of ancient Greece and Rome. Some questioned whether the “savages” of these lands were capable of producing such wonders.

Meanwhile, across the Atlantic, Europe was a politically fragmented backwater, and hardly poised to become the dominant force on the globe. How did Portugal, for example, a territory barely larger than Maine, eventually build a trading empire so dynamic it would eventually push out into the Atlantic and set the stage for Spain’s historic expeditions of conquest?

Professor Eakin paints the complex political, cultural, and technological landscape of Spain and Portugal in their infancy.

You learn how they became the vanguard of the sleeping European giant that was soon to stride across the oceans and bridge two long-divided worlds.

One biographer said of Columbus that, “Like a squid, he oozes out a cloud of ink around every hard square fact of his life.”

Professor Eakin separates the facts about Columbus from the myths, and hones in on the significance of his voyage and the frenzy of exploration it set off:

You see how the ruthless conquest and subjugation of the Caribbean island peoples set a pattern that was played out across the Americas.

You’re introduced to the ruthless and strategically brilliant Cortés as he vanquishes an empire of millions with just a few hundred Spanish soldiers.

You learn how Francisco Pizarro, inspired by Cortés, set out for Peru with the same dreams of gold and glory.

Eventually, all of Mexico and Central and South America would be defeated, and the European powers would begin to create new societies in these conquered lands.

A Voyage through Turbulent Times

The many topics covered by Professor Eakin as he moves through the turbulent times of the conquest also include:

How the native peoples of the Americas resisted complete assimilation by creating new and colorful religions from the simmering pot of Christianity and long-held native beliefs.

In the final lectures, Professor Eakin looks at the foundations of the different societies in the Americas and looks forward, for better or for worse, to what future may emerge from this common past.

Readmore : Conquest of the Americas

SKU: 9b34d692099b Category: Everything Else Tag: Conquest of the Americas
Share