Delivery : Instant Email Delivery
Gabrielle Moore – Orgasmic Addiction is digital course. We will delivery via your email with download links. You can online access with smart device or download to personal computer. 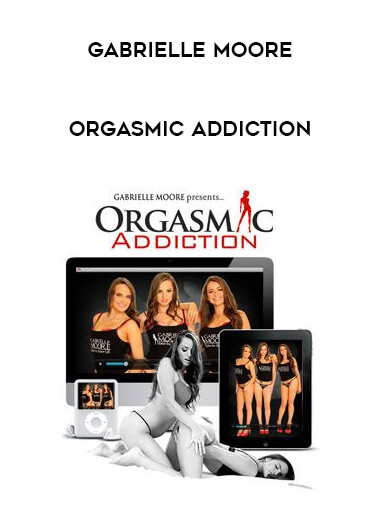 I remember a student once telling me that giving his girl an orgasm was like catching a greased ball thrown from 100 feet away with all the lights out.

The female orgasm is elusive, tricky and an ever-moving target.

Or so you men believe…

I’ve never met a woman yet who couldn’t orgasm with the right technique.

Women can experience orgasm in different ways from men. Sometimes more powerful, longer, or less controlled than the male orgasm.

The new TRIGASM TECHNIQUE, the heart of my new “Orgasmic Addiction” program, has been described as ‘The Holy Grail of Sex’, ‘The Ultimate In Sexual Pleasure’, and a student inspired the name for this course – ‘It’s Like Sexual Addiction – You Just Can’t Get Enough’!

So, let’s put those facts together.

– But women PROVE that’s not the case, that they can be even better than the male orgasm, and that they can even be strong enough to cause sexual addiction!

So What Is The TRIGASM – And Why Do You Need To Learn To Master It?

The TRIGASM is a combination of THREE separate erogenous zones on your wife or girlfriend’s body.

When stimulated one at a time, these can lead to orgasm. That’s great. Women love orgasms, believe me.

But here’s the big news…

It turns out that when stimulated TOGETHER, they can cause your partner’s body to erupt with an orgasmic force like a massive volcano!

But the TRIGASM isn’t just an orgasm times three.

Women have described it to me as ten, twenty, fifty times as powerful as a single, traditional orgasm. They say that the combination of these three centers of pleasure climaxing at the same time is the most mind-blowing experience of their life.

And THAT Is What Can Create Sexual Addiction…

Which is not a bad thing!

In this context, sexual addiction merely means that your wife or girlfriend can quickly become absolutely addicted to having sex with you. Not with anyone else – they’ll never LOOK at another man the same way – but with YOU.

That means more sex for you…

– More focus on your needs…

And I’ve even heard that some male research subjects had better, stronger orgasms themselves, just from knowing what they were doing to the women!