Delivery : Instant Email Delivery
George Hutton – Maximum Social Confidence is digital course. We will delivery via your email with download links. You can online access with smart device or download to personal computer. 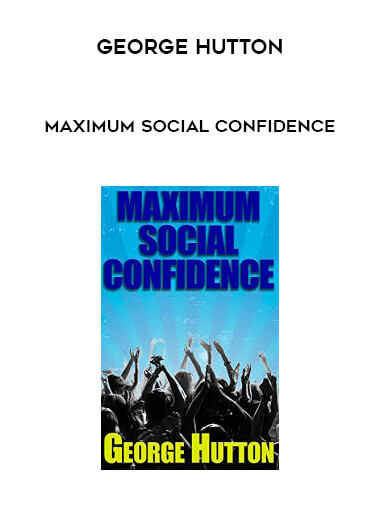 and Destroy Anything Else That’s Stopping You From Easily

and Confidently Talking to Anybody, Anywhere, Anytime!

How Do I Know This?

Because I also know that you aren’t broken. You aren’t deficient. It doesn’t matter of you’ve tried every book, NLP program and hypnosis session on the planet. There’s not a problem with your brain. There’s no issue with your emotions. There’s absolutely wrong with your upbringing.

So What’s The Problem?

The problem is that it’s easy inside your mind. It’s easy to rationalize why you shouldn’t get nervous. But when you are put on the spot, when it’s your turn to get up and speak, when it comes time to walk across the bar and talk to that cute girl or guy, something happens.

The REAL Cause of Social Anxiety

Everybody has social anxiety. Not just you. Everybody. But most people will NEVER admit to this. Not to their buddies, not to their girlfriends, and certainly not to their coworkers. But it’s there.

How Do I Know?

Because social anxiety is just like hunger. If you’re human, you feel hungry. What does not feeling completely social confidence, all the time have to do with hunger?

Because large social situations filled with people you don’t know aren’t your natural state. Being surrounded by friends and family is.

And unless you are a secret X-Men or some kind of sociopath, you are not as confident as you want to be. As you can be. As you are going to be once you understand the easy and natural steps to get there.

The reason is based on how our brains work. How we think about people we don’t know. The ancient programming that runs our bodies, minds and emotions. That pesky fight or flight mechanism that kicks in when there is zero danger.

Giving a speech isn’t dangerous. Starting a conversation with strangers isn’t dangerous. Talking to attractive people and creating relationships isn’t dangerous. But your inner mind doesn’t think so. Every single time you do something that triggers the ancient and no longer useful fear of social rejection, that same fight or flight mechanism flips on.

That same fight of flight mechanism that keeps us scared of tigers thinks we’re going to be killed if we give a speech to a group of strangers!

But you can trick your inner mind. You can retrain your inner mind. Not just temporarily, but permanently. With the step by step processes, exercises, and listening sessions in this course, you will soon be RID of that ANNOYING lack of Maximum Social Confidence in no time.

Your Benefits Of Maximum Social Confidence

– Build Relationships With Any Body

– Give Speeches with Maximum Confidence

– Easily Start Conversations With Anybody

– Always Be The Life Of The Party