Delivery : Instant Email Delivery
Gianni Grippo – Daily Drills is digital course. We will delivery via your email with download links. You can online access with smart device or download to personal computer. 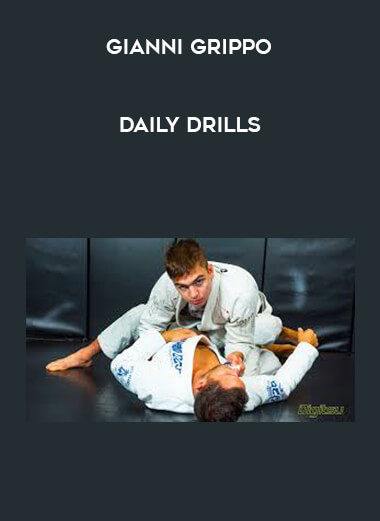 Before I dive into the reasons I hold such a deep love for drilling, I first want to apologize to Kit Dale for going against him on this subject. Kit, believe me I am one of your biggest fans, but I cannot fathom the thought of not drilling or believing that drilling is detrimental to someone’s game. Perhaps someday we can have a nice face-to-face debate about this, with Bernardo Faria backing me up.

Anyways, on to the subject at hand- drilling. I must say, until my final days as a purple belt I didn’t even know what drilling meant, from what I knew I thought it was just the techniques you go over during the class before you train. But oh, was I wrong. I learned what drilling really was and what it meant to one’s game the first time I attended a Mendes Brothers seminar at Joseph Capizzi’s school in Staten Island, NY. At that point I was the naive 18 year old purple belt world champ thinking I was doing everything right in my training and nothing needed to change. But after rolling with Rafael and Guilherme for the first time, my eyes widened like how you see the cartoon characters in TV shows, amazed by the precision in their techniques. I could tell everything they did they had done at least 10,000 times before.

So for the rest of that weekend long seminar, I absorbed everything I could. I listened closely to how they structured their training and how they kept on a very regimented schedule without ever going off of it. I studied each technique as if my life depended on it, picking up the berimbolo and leg drag, in particular, seeing that I could fit that into the game I already played. I also payed close attention to their belief in the importance of drilling and why they believed it worked. They talked about how you want to practice a certain technique so many times until the movement becomes automatic, you no longer have to think before you act. I bought into this idea immediately

. From there I began to drill, mainly starting off with a few variations of the leg drag. Then it just so happen that I sustained an injury at that time, one that kept me out of regular training for around two weeks but it wasn’t bad enough to keep me from drilling. So from there I would do two 90-minute drilling sessions a day, all revolved around leg drags. I practically killed myself just doing constant repetitions of leg drags. Then the time came for me to go back to training and I distinctly remember seeing opportunities for leg drags everywhere! It was like putting on glasses and being able to see clearly for the first time! I saw openings for leg drags from what felt like all angles and instead of thinking about it, when the opportunity presented itself my body went into action and I automatically went to work. I thought I was the Terminator that day…

After that, for the next year I consistently drilled at least once a day focusing on a different position each month but always making sure to rep out the berimbolo and leg drag. I went over the techniques enough to the point where my game completely changed over the course of one year. In 2011 as a purple belt my leg drags were non-existent and I didn’t even know how to spell berimbolo, but by the 2012 worlds they were my two main techniques I would be going for- and successfully landing in most of my matches. What do I attribute that to? Drilling.

Now today I feel like my drilling revolves around my training as it helps me stay constantly goal oriented. Drilling 2-3 times a day now I have a different plan for each session. In the mornings I’ll drill from the guard, at night I’ll drill guard passing and in the afternoon sessions I’ll choose either that I feel needs more work at the time. Each session will revolve around one position with 2 or 3 variations and with that I always go into the training with a goal of what I want to try to land. Then with this I feel like it carries well into competition- knowing I have gone over each aspect of a match over and over again gives me the confidence that I can attain my goals in the match at hand. Like I said in my last post about mental preparation- everyone is different. Everyone may have something different that works better for them and maybe drilling doesn’t reap the benefits for some like it has so far for me. But, I truly believe with hours of organized and consistent sessions of drilling specific techniques your game will improve. Don’t believe me, just give it a try (I’m looking at you, Kit.) Gianni Grippo – All About the Bolo