Delivery : Instant Email Delivery
Globalism vs Nationalism – International Economic Institutions is digital course. We will delivery via your email with download links. You can online access with smart device or download to personal computer. 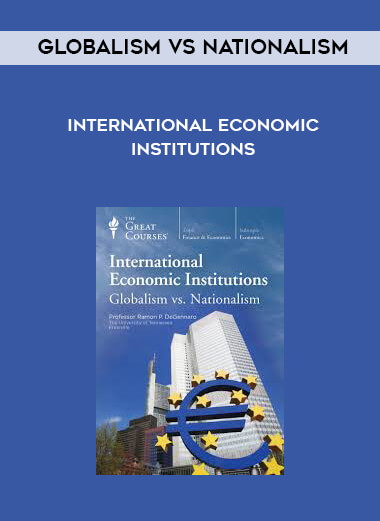 The philosopher George Santayana famously said, “Those who cannot remember the past are condemned to repeat it.”

To see how economic mistakes can repeat time and again, you need look no further than recent history. The Great Depression was the result of a combination of protectionism, populism, and nationalism that combined with bad government policy to make a toxic brew that mired the U.S. and much of the world in an economic downturn for nearly a decade, with effects comparable to a major war. Less than a century later, the Great Recession of 2007-2008 brought a repeat of the financial devastation of its precursor, even if some of the circumstances leading to it had changed with the times. Similar events can be traced throughout other parts of the world, as exemplified by the Greek debt crisis that resulted when the nation gave up the ability to set its own monetary policy as it joined other nations linked by the euro as common currency.

These collapses demonstrate how easy it is to assume large-scale economic failures are isolated, both historically and geographically, when in fact they are immersed in long-standing philosophies and can have immense global ramifications. However, national economies are so complex and their ties to other nations are so numerous that it can be hard to know what lessons to draw from any given crisis. That’s where international economic institutions come in. Since the end of the Great Depression and World War II, bodies such as the World Trade Organization, International Monetary Fund, World Bank, and G-20 have sprung up with a variety of missions, including promoting trade, ensuring financial stability, eradicating poverty, and advancing sustainable economic growth. Included among these goals is the ultimate aim: preventing a descent into worldwide economic chaos, which could easily lead to war.

But while such organizations are trying to knit the world more tightly together, in many countries the voices of populism and nationalism are objecting that the price is too high, that traditional livelihoods and customs are being irretrievably lost. Furthermore, such organizations have the failings common to all human institutions. Do they really work? Have some saved us from disaster? Are we better off without others? What is the best route to prosperity, and do these groups help smooth the way or obstruct it?

International Economic Institutions: Globalism vs. Nationalism uses these influential organizations as a lens to study today’s globalized economy. In 24 eye-opening half-hour lectures, award-winning teacher and economist Professor Ramon P. DeGennaro of the University of Tennessee, Knoxville, conducts you through the dizzying array of groups, their backgrounds, goals, and the important roles they play in the economic life of the entire world.

In a lively and fascinating presentation that covers major principles of political economy, international finance and trade, and macroeconomics, Professor DeGennaro analyzes these organizations in depth to reveal their strengths and weakness. In the process, he presents a panoramic portrait of globalization with all its intriguing connections.

Globalization as we understand it today may feel like a fairly new phenomenon, a sentiment bolstered by the rise of the internet and the increasing visibility of major trade agreements in the headlines. You may be surprised to realize that modern globalization began as an effort to prevent a repeat of World War I, meaning it actually took root nearly a century ago. The resulting League of Nations failed in that goal, as the Great Depression took hold, producing economic and political turmoil that helped incite World War II. Professor DeGennaro demonstrates the ways nations tried again in the aftermath of World War II, closely examining the institutions that resulted to form the core of today’s international economic system, including:

Bretton Woods Conference: In a set of agreements negotiated in 1944 at Bretton Woods, New Hampshire, 44 Allied nations established a gold-based exchange system, the International Monetary Fund to oversee global finance, and the precursor of today’s World Bank to aid the recovery of war-ravaged economies.

General Agreement on Tariffs and Trade: Recognizing the role of high tariffs in the Great Depression and the rise of Adolf Hitler, 23 nations agreed to substantially lower trading barriers, spurring some of the fastest growth in the history of international commerce. This compact evolved into the World Trade Organization (WTO).

European Coal and Steel Community: In 1951, six European nations, including traditional enemies France and West Germany, took the first step toward a common market with the goal of making war between them impossible. That organization eventually grew into the European Union (EU), comprising almost 30 countries.

As Professor DeGennaro makes clear, these achievements have not been without setbacks. With each step towards globalization and economic stabilization comes new difficulties and renegotiations. For many of the institutions, the future is unclear. For example, in its quest to build a united states of Europe, many believe the EU has become too big and its regulations too intrusive, inciting the UK to vote to leave the union in 2016 in a drastic step dubbed “Brexit”-a rare case of an international institution facing mutiny by one of its most important members.

The Most Fundamental Institutions of All

Professor DeGennaro argues that there is another type of institution that is more fundamental than the panoply of international groups. These are the laws, customs, and practices that are the preconditions for prosperity, including:

Rule of law: This principle ensures that every person gets equal treatment before the law. Government officials cannot act arbitrarily and are subject to the same laws as ordinary citizens. In general, only a strong central government can provide this commitment.

Property rights: This bundle of rights governs what you can do with a given resource. It ensures that you reap the rewards from your land, buildings, businesses, ideas, or investments. In many societies, property can be taken away on a whim.

Economic freedom: Rule of law and property rights are just two aspects of economic freedom, which also includes free markets, the right to compete, freedom of contract, and open access to political power-as opposed to a narrow elite holding all power.

In International Economic Institutions, you see how the two types of institutions-the formal economic alliances and the principles of economic freedom-don’t always work in synergy. For example, despite loans from the World Bank and regional development banks, many poorer countries can make little economic progress due to their weak property rights and biased application of laws. By contrast, wealthy nations are wealthy precisely because they observe these guarantees.

On the other hand, the United States had all the essential economic liberties in 1930, as did the UK and many other advanced economies. Yet their self-destructive tariffs and mistaken fiscal and monetary policies brought the disaster of the Great Depression upon them. As you will learn in this stimulating course, there is power, safety, and prosperity in international cooperation-if done right. Intuition Through The Soul Package by Danielle MacKinnon Writing Your Life – The Penultimate Truth by Dr. Joseph Riggio