Delivery : Instant Email Delivery
Karl Gotch – Conditioning For Combat Sports is digital course. We will delivery via your email with download links. You can online access with smart device or download to personal computer. 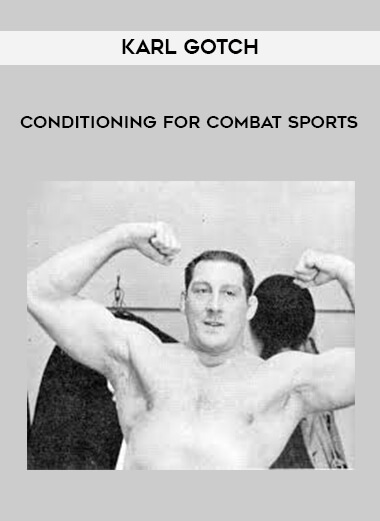 Wrestlers are notorious for being phenomenally fit and the “God of Wrestling”, Karl Gotch, is even more notorious for having one of the most rigorous and ingenious conditioning workouts you will ever see. Gratefully, Karl captured a few of his ideas on video (if you prefer Video-On-Demand scroll down, you could be watching this in minutes!)

This EXPANDED deluxe 3-disc set shows the workout Karl designed over the course of a LIFETIME of grappling and coaching to address the sport specific needs of the submission wrestler.

Speed
Agility
Strength (explosive)
Endurance
Reaction Time
As Karl says, “Wrestling is a workman’s sport, you need no expensive equipment and can practice it anywhere”. The same goes for Karl’s Conditioning for Combat Sports. All you need is few minutes, the desire to excel, and the knowledge Karl will share with you.

Karl has forgotten more about wrestling and fitness than some modern “experts” will ever know and now you have a chance to sit in as he coaches student Tom Puckett through the workout of a lifetime. Mark my words, few that watch this video will ever be able to accomplish the workout that Karl runs Tom through.

This is the ORIGINAL video that launched the modern bodyweight revolution, and it STILL shocks and inspires people to this day!

Disc two features MMA legends Funaki and Suzuki on a visit to the God of Wrestling’s home in Florida. It is a creative goldmine for anyone preparing for a fight or tournament. The tips, techniques, and secrets shown within can help make your next competition a real winner!

Now, go behind the scenes as legendary Karl Gotch runs true MMA pioneers through one of his famously tough workouts.

Pancrase founding fathers Minoru Suzuki, Masakatsu Funaki, Yusuke Fuke, and Yukari Osawa all take turns wielding Karl’s Indian Clubs and Macebell (after he demonstrates how it should be done), then you can see them sophisticating the exercises seen on disc one.

Disc three is My Cigar With Karl: A Conversation with Karl Gotch and Jake Shannon, an hour-long conversation Jake Shannon was permitted to film with Karl while sharing a cigar together on his back porch after training.

Listen to Karl as he discussed his life, the history of wrestling, and wrestling techniques.

This is an exceedingly rare chance to sit in on a conversation with the man know as “The God of Wrestling”.

More amazing and never-before-seen ideas to add to your fitness regimen from the man that almost single-handedly preserved legitimate Catch-As-Catch-Can grappling techniques from the days of Billy Riley and Pops Charnock to today’s generation of competitive submission grapplers.