Delivery : Instant Email Delivery
Kevin Jackson, Mike Van Arsdale – Ultimate Takedowns, vol.1-6 is digital course. We will delivery via your email with download links. You can online access with smart device or download to personal computer. 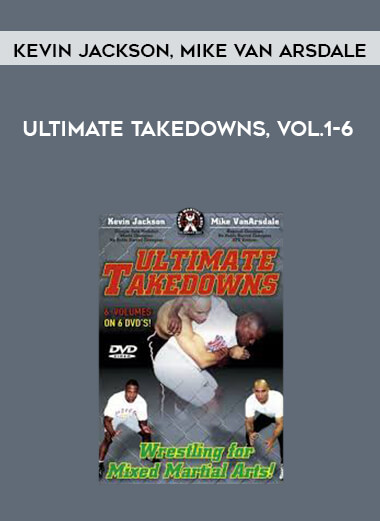 Description : Olympic champion Kevin Jackson and American champion Mike Van Ersdale (both of them played in the UFC, winning from the little-known fighters and losing the famous ones) demonstrate and explain the technique of throws and transfer to the ground, defense and counter-measures.

This new video release staring Olympic Gold Medalist Kevin Jackson and NCAA wrestling superstar Mike Vanarsdale will teach you everything you need to know about takedowns and defending takedowns. No matter what style you practice, Brazilian Jiu-Jitsu, no holds-barred or traditional martial arts, this video series is a must. This video series contains the techniques and counters that wrestlers do not want you to learn!

Learn the fundamentals of becoming a takedown master with this video! First you will learn the proper offense and defensive fighting stances. Then learn the critical center line and movement theory. You will also learn square and staggered stance and when and how to use them. Learn elevation changing, head control, hand control, two on one and level change theory. Learn penetration techniques like back step, jab step, and outside step penetration. This is the most important step of learning takedowns.

This tape starts with basic and powerful takedowns like double leg takedowns, heel picks, head inside singles, low singles, front and back side finishes. All takedowns are explained with extreme detail, giving you a solid understanding on these moves. How to use take downs in a no-holds-barred situation. Learn how to close the distance in NHB fighting. The first time ever this material has been shown on an instructional video.

Learn more advanced takedowns like double legs, advanced singles and much more. Learn the important and over-fighting method and advanced counters and set ups into takedowns. This tape also has multiple finishes to each takedown. You will also have the high crotch takedown series and more. Learn the arm drag theory and arm drag takedowns. Multiple fakes, tricks and advanced techniques. This is the Olympic level technique at its best. This is the most advanced work ever produced on takedowns for martial arts, submission grappling or no-holds-barred fighting!

Kevin Jackson and Mike Vanarsdale really pick it up in this tape. This tape concentrates on wrestling throws and sweeps. Learn proper foot work and body position to set throws up! Learn effective over and under hooks throws and hip tosses, headlock throws and multiple variations, including the devastating double under hook headlock throw. Learn the theory of foot sweeps and how to set them up. Includes many foot sweep and their variations. Also includes arm throws, arm spins and many, many more. An excellent video for mixed martial arts fighting!

For the first time ever, the world class wrestlers Kevin Jackson and Mike Vanarsdale teach the secrets of defending all take downs. First you will learn the critical lines of defense such as proper stance, defensive motion and level change theory and the head and hands defense. Learn how to properly sprawl and special sprawling drills. Then, you will learn all of these techniques together as you will learn to read and defend any takedown. Learn to defend take downs in no-holds-barred, mixed martial arts and submission grappling. Each takedown defense is highly detailed as double leg take downs, single leg take downs, low single legs, high crotch and many more. Learn to use the advanced methods of defense like the chin and arm method. Learn how to counter a takedown and turn it into a takedown of your own! This tape is the most important work. You will not miss this exciting new video!

Master more advanced takedown defenses. Learn to defend the Jiu-Jitsu clinch and Jiu-Jitsu style takedowns and the devastating Jiu-Jitsu front choke takedown defense! Learn to defeat highly advanced wrestling takedowns in mixed martial arts competitions. Defeat the over and under hooks, inside holds and the collar tie. Learn to defeat the front headlock, the Russian tie up and other more advanced wresting attacks. Learn to use advanced key locks against your opponent’s takedown attempts. Learn the dreaded Peterson roll defense. This is the video that has been waiting for! Never be taken again, order today! $19.00
Delivery : Instant Email Delivery Fix My Game With Manuel Ribamar is digital course. We will delivery via your email with download links. You can online access with smart device or download to personal computer.
Add to wishlist
Enroll Course
Quick view