Delivery : Instant Email Delivery
Kid Anderson – Blues Refinery is digital course. We will delivery via your email with download links. You can online access with smart device or download to personal computer. 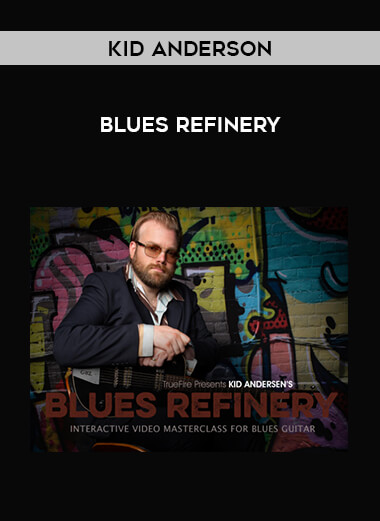 We’re thrilled to welcome Kid to the family with his first TrueFire course and masterclass, Blues Refinery. You will likewise be thrilled when you start applying any of the dozens of “refined” technical and creative blues moves that Kid shares in this masterclass course.

“I’ve always loved playing the blues and have particularly been drawn to the artists who play with musical intent and refine their lines and solos using approaches outside the typical blues box and pentatonic scale. All of those greats influenced my own sound and approach which I’m excited to share with you here in Blues Refinery.”

In the first section of the course, Kid shows you many of his approaches for navigating the fingerboard, generating soloing ideas out of the typical blues box, and soloing with intent rather than just ‘noodling lines.’ You’ll also work on ‘refined’ techniques for bends vibrato, rakes, and muting.

“In the first part of the course, I’m going to talk about some of my most used concepts for working out of different chord shapes instead of the same old blues box. Navigating around the neck that way, and coming up with new ideas. We’ll talk about how to play with intent and conviction – really making a musical statement instead of just noodling around, looking for the note. Of course, we’ll be covering some of the blues basics along the way, stuff like bends, vibrato and how to make your note choices impactful by using rakes and muting.”

In the second section, Kid presents what he refers to as “shortcuts to sophistication” — six very effective, and very accessible ways to refine your blues lines and solos.

“My “shortcuts to sophistication” are some of my favorite licks and tricks that I picked up over the years by listening – which is how you learn – on how a blues player can sound like you have a chordal and harmonic knowledge that you might not necessarily have. Basically, this is a way to fake like you’re playing jazz while playing the blues!”

You’ll put all of Kid’s refined moves, shortcuts, approaches, and techniques to work in the final section where you’ll play through 5 full length soloing performance studies. Kid will first perform the so0lo and then break it down emphasizing all of the key elements in detail.

“Alright, it’s time for the fun part! I get to play. I’m going to play over five different tunes, applying a lot of the concepts that I’ve been talking about. After I play them, we’ll break it down with tablature to guide you through what I played. And I’ll tell you why and how I played it so you can do it too!”