Delivery : Instant Email Delivery
Kyle Dake’s Claw Series- Wrestling Technique is digital course. We will delivery via your email with download links. You can online access with smart device or download to personal computer. 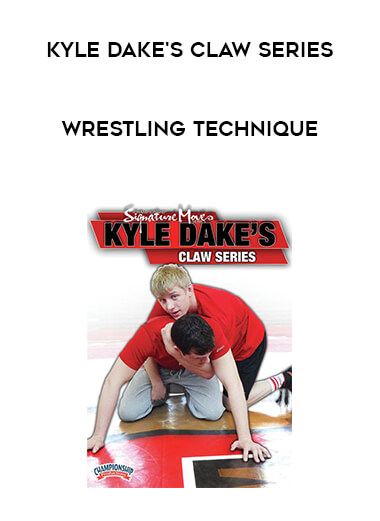 The first wrestler in NCAA history to win four NCAA championships in four different weight classes; Hodge Trophy winner in 2013, four-time NCAA Division I All-American; Male Collegiate Athlete of the Year in 2013, according to Sports Illustrated

All coaches and wrestlers have been waiting for this video!

Learn how to wrestle and score from the claw position, the same sequence that propelled Kyle Dake to four NCAA titles. Kyle Dake displays his favorite series by walking you through the series of tilts and spins that he has utilized to achieve success.

Discover six exercises that you can add into your everyday workouts to teach the essential skills required for success with this claw series. When your back is hurting, these exercises will help you relax. It is occasionally necessary to expose your back in order to score, but control is essential.

Learn how to establish and retain control from a variety of postures, as well as a few methods to make you feel more at ease in certain positions. Coaches will also learn how to make these drills both entertaining and competitive in order to optimize results.

Lining up correctly from the top position may provide wrestlers with an edge even before the whistle blows. They will learn how to “line up heavy” in order to make their opponent uncomfortable and divert their attention away from their defense. This will let you to take command and begin your claw series.

To properly flip your opponents with the claw, you must first comprehend its subtleties. Dake demonstrates the move’s intricacies as well as the several transitions that go with it. You’ll learn how to apply the fundamental claw tilt with a thigh pry, deep waist, or wrist, as well as how to make these transitions throughout the course to become an adept chain wrestler.

When your opponent blocks your claw, you may have to resort to a side move. One of these maneuvers is the half tilt. The half tilt is similar to and as effective as the claw tilt. You will learn how to transition from the claw to the half, as well as its variants, such as a knee switch. When your opponent is battling the claw, this simple shift in direction will provide several turn possibilities.

Your side will score a lot of points with the half tilt, but scores aren’t always enough. Dake demonstrates how to close the deal and obtain the pin after securing back points. He teaches a power claw for usage against opponents who are incredibly powerful and difficult to turn, as well as the step through turn for when your opponent flattens out.

You will learn to transition into a 2-on-1 tilt, a tight waist tilt, and their variations, in addition to the claw and half tilts. These transitions will allow you to attack from a variety of angles.

This video is an excellent resource for coaches instructing wrestlers on how to wrestle from the top position. It is a practical technique that will provide your wrestlers with the knowledge and confidence they require to control, turn, and pin their opponents.

After witnessing Dake use this series to secure his fourth national title, it’s difficult to argue against its effectiveness. You will undoubtedly improve from the top position and take your technique to the next level if you learn and master this claw series.

“[Dake] is an incredible teacher from whom many coaches can learn right now, as he is still very close to the action and understands the importance of incorporating fun into learning.” – Customer Feedback