Delivery : Instant Email Delivery
Mark Harbert – Video Ad Playbook is digital course. We will delivery via your email with download links. You can online access with smart device or download to personal computer. 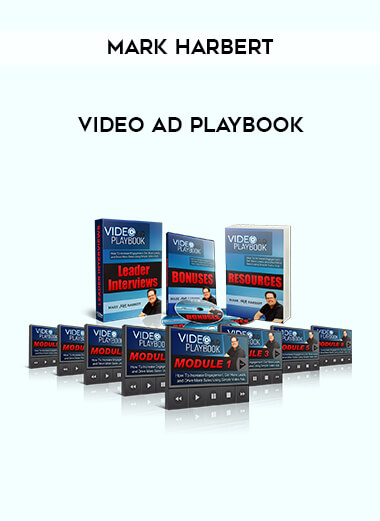 From The Desk of Mark Harbert

Is your lack of leads threatening your dreams of having a successful home business?

If youre laying awake at night worrying about your lack of lead flowinstead of laying awake EXCITED over how many daily leads youre pulling in then I want to to help you turn that around FAST!!

You MUST have leads. Theres just no way around it.

However when those leads arent coming in at all (Ive been there before)or stop coming in because of a force beyond YOUR control (been there too) its the worst feeling in the world.

Your business does not move forward and huge discouragement starts to set in.

You begin to question your quest for home business success!

I know how you feel because the beginning of this year had me getting slapped silly. Let me explain

You see Id built a Six-Figure Per-Year business using my favorite strategy video marketing with YouTube as the driving force.

I love the power of video marketing. I love what its done for my business. (Ill tell you all about why soon)

Yet a little over 6 months ago my entire business was put in serious jeopardy by YouTube.

Because YouTube didnt just slap methey punched me right in the gut!

After months of getting videos flagged by my competition, and by YouTube themselves because of crazy rule changesthey finally shut down my biggest video channel. A channel that was bringing me in a consistent 43 – leads each and every single day.

Suddenly my lead flow once again for the first time in a long time began to worry me.

It wasnt just me either. This happened to many of my marketing friends (some who still havent recovered).

So like any good fighterI had to bob and weave a bit. I went deep into the lab, got strategic and creative, and found a NEW much more effective and consistent way to get people to my videos.

A way that I could control!

Todayyoull have the chance to benefit from that

It was never an option

If someone tells you differentlyeither theyre lyingor theyve never gotten to experience that almost instant know, like, and trust capabilities of video.

After generating over 39 – K leads onlineand putting them through every type of funnel that you can think of Ive proven over and over again to myself and the online community that video converts better than anything else you can find.

Theres nothing like having a prospect look directly into your eyes and feel like theyve just met you. It increases your influence by insane numbers.

One minute of video equals the power of 1.8 million words of text.

Read that line again. It sounds insane but its been tested and proven!

Thats about equal to 3,600 typical web pages. How long would that much text take you to create VS. a short 1-minute video?

This was proven in my own marketing every single time. Videos tripled and even quadrupled my conversion rates!

So the bottom line there was no way in hell I would abandon that power of video in my marketing.

I simply needed to find a new, safer, and more effective way to get people to see my videos. My decision didn’t take long Dan Lok – Unlock the Miliionaire Within