Delivery : Instant Email Delivery
Min Liu – VERBAL DOMINATION: THE WEAPONS OF VERBAL COMBAT is digital course. We will delivery via your email with download links. You can online access with smart device or download to personal computer. 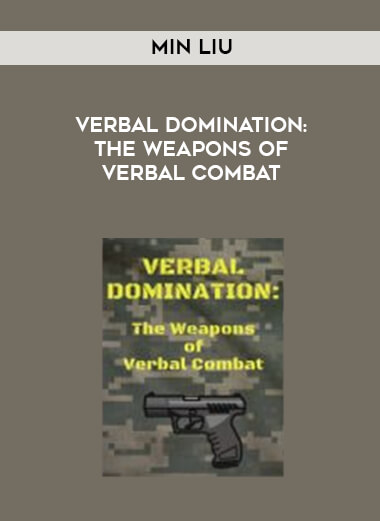 “I wish I had had this course sooner.“

In Verbal Domination: The Weapons of Verbal Combat, you will learn:

Inside, you will also learn exercises that will help you become cooler, calmer, and more collected under pressure, along with exercises to help you reinforce all that you learn in Verbal Domination.

In life, business, career, social situations, and maybe even your love life, there will be times when you are put to the test verbally by other people, and Verbal Domination will teach you all the skills and tactics you need to ensure other people never trifle with you again!

In far too many situations in life, you have to be armed with the verbal skills necessary to put people in their place, or to escape sticky, stressful situations.

Excelling in verbal warfare is NOT optional.

Yet, this is not information or intelligence you will learn in school. Learning how to engage in verbal combat in a cool, sophisticated, and most importantly, effective way just isn’t taught anywhere.

I didn’t even learn any of this in my three years in law school and in many years as a junior corporate lawyer. I had to learn it through the school of hard knocks.

Not everyone is lucky to have someone who’s like a big brother to you, willing to pass down crucial life lessons, but now you are.

Here are some rave reviews about Verbal Domination:

-“One year ago I had my first encounter with someone who verbally attacked me. That hadn’t happened since high school. Until I turned 18, I was able to solve my problems with my fists, right up until the day I was sent away to the bad kids’ school. However, in adult life, that’s just not possible.

Verbal conflict always frightened me because I didn’t understand it. I always felt that I’d say the wrong thing and get laughed at, and because physical fighting isn’t possible, the feeling festered…

So, one year ago I got my ass kicked verbally in a very public way as I was caught off guard, and ever since that day I kept looking for a way to make sure that never happens again.

Eventually I found Min Liu’s website and I downloaded his ebooks, but they didn’t give me anywhere near the quality that his “Verbal Domination” course offered. However, everything about his knowledge painted him as an expert, and so I invested in “Verbal Domination.”

My goal now is to listen to the material every week to get it firmly planted in my head, and to do the practice tip at the end: go out and LOOK at people to see how I’d “Frame” them. (Check out his course to find out what exactly that means. It’s probably not what you’re thinking.)