Delivery : Instant Email Delivery
Mitch Harper – 60 Days Startup is digital course. We will delivery via your email with download links. You can online access with smart device or download to personal computer. 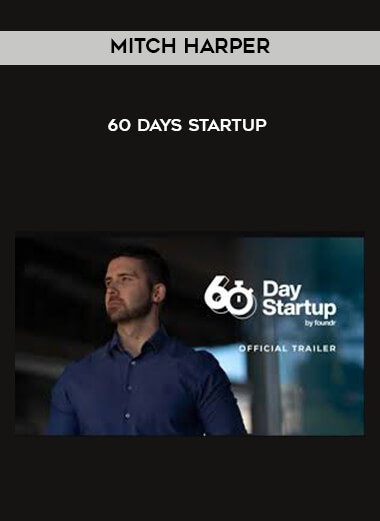 How did Mitch co-found a company that does over $100,000,000 per year in revenue? Through his methodical approach of pain validation in a market. Join the waitlist today and we will send you immediate access to this full lesson with Mitch Harper (taken from inside the 60-Day Startup course).

Learn how to build a startup in record time with the

co-founder of BigCommerce (which did $100 million in sales last year) and 7 other tech products in which he’s used this exact launch system.

Mitch has been building software companies since he was 17, you’ll learn the exact step-by-step sytem he has used to build companies like BigCommerce into an 9-figure ecommerce powerhouse . He’s been teaching this framework to his private clients include startups like Airtasker, FollowUpBoss, Biteable, Zookal and more.

Mitch has invested and advised numerous companies, he also gets pitched tons of ideas. You’ll learn Mitch’s #1 method to validate your product to be successful before you even build the company.

PRODUCT DEVELOPMENT: MVP vs MSP, you’ll effortlessly identify which is right for you, and how to actually get your product built without having to know a single programming code yourself.

Getting Your First Paying Customers: This is the most important element of the pre-launch phase, you’ll learn how to leverage it to skyrocket your audience base and get your first paying customer in 60 days.

Mitch Harper, the founder of BigCommerce, has not only scaled BigCommerce into a 9-Figure ecommerce powerhouse, but is also an 8-time startup founder with over $200 million in sales under his belt. In his teens, he was more excited burying his head in books like “Losing My Virginity” by Richard Branson, than playing video games. And by the time he was 13, he knew he wanted to become an entrepreneur.

Mitch has been building software companies since he was 17. He has taught his proven startup framework to his private clients since 2011 which include startups like Airtasker, FollowUpBoss, Biteable, Zookal, and more.

He launched DevArticles.com in 2001 which then was acquired by DeveloperShed for 6 figures. He was 21 at the time.

After that, he started to build web applications and in 2003 he co-founded Interspire.

From 2003 to 2008, Mitch built various web applications to help small businesses grow – including SendStudio, ActiveKB, DevEdit, and WebEdit. He bootstrapped Interspire from the proceeds of DevArticles and some money his co-founder worked as a web designer. In 5 years it was doing $7 million per year in revenue with over 50,000 customers and 250,000 email subscribers.

He then started BigCommerce with no funding or outside capital, grew it to 10,000 paying customers in the first year and raised $155 million from some of the world’s best investors, including Steve Case – the founder of AOL.

After running BigCommerce as co-CEO and growing the company from 8 people in Sydney to hundreds of employees in 4 countries, over 100,000 customers and revenue approaching $100 million he stepped down in early 2015 to focus on helping other entrepreneurs grow their businesses as CEO of Insane Growth.

Mitch’s mission is to directly impact the growth of 1 million businesses by 2027. A Leader’s Guide – How to Build a Thriving Workplace