Delivery : Instant Email Delivery
Morihei Ueshiba – The Founder of Aikido is digital course. We will delivery via your email with download links. You can online access with smart device or download to personal computer. 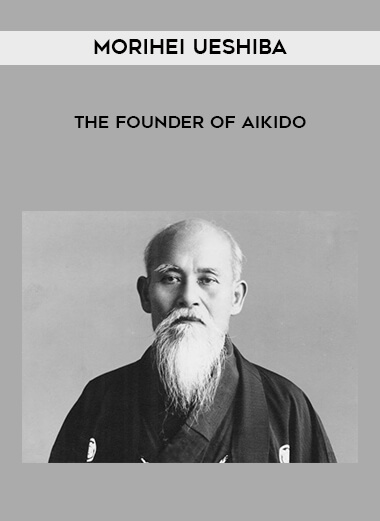 Aikido’s founder, Morihei Ueshiba, was born in 1883 in the fishing and farming village of Tanabe, Japan. He was the only surviving son of a prosperous father and cultured mother who considered him their gift from heaven. His premature birth hindered his physical development; even when he was fully grown, he was little more than 5 feet tall.

His father, Yoroku Ueshiba, became concerned about the boy’s small and weak physique and encouraged him to engage in sumo wrestling, swimming and running. As the youth progressed in the sports, he began to realize his physical potential.

Other than mathematics and physics, classroom studies held little interest for the young Morihei Ueshiba. Instead, he wanted to learn meditation, chants and religious rites from Buddhist priests.

Morihei Ueshiba was a restless spirit in his younger days, charging from one occupation to the next, performing his duties easily but finding no challenge in them. At the age of 18, he was drawn to the martial arts, and until his death, the arts continued to delight and nourish him.

Morihei Ueshiba quit his first and second jobs because they were too confining. When he became politically involved in helping local fishermen fight an oppressive new law, his councilman father lost patience. He gave his son some money and told him to find a career that suited him.

After a sojourn in Tokyo as a shopkeeper, Morihei Ueshiba developed a severe case of boredom, and because of his poor diet, he came down with beriberi. Although he ended up back home with empty pockets, he was able to tell his father that he had found the martial art of jujutsu enjoyable.

In 1902 Morihei Ueshiba married Hatsu Itogawa, but little is known of her. A year later he was called to serve in Japan’s armed forces but was turned away for being one-half inch too short. The determined young man then hid in the mountains and trained passionately, sometimes hanging from trees with weights on his feet. He was accepted by the infantry the following year and served in the Russo-Japanese War.

Morihei Ueshiba and the War

Little is known of Morihei Ueshiba’s 18-month tour of duty except that he was praised by his superiors, who recommended that he make the army his career. Morihei Ueshiba chose to go back to civilian life, however.

In 1905 the war ended, but Morihei Ueshiba was ill and depressed because of the bitter fighting and the spilled blood of innocents on both sides. Throughout his early and middle years, these periods of illness seemed to overcome him whenever suffering increased in the world, especially in Japan.

A baby girl arrived at the Ueshiba household in 1910, and for a while Morihei Ueshiba’s spirits lifted. Three boys were born later, but only one, Kishomaru, survived to take his father’s place as an aikido leader.

As a young man, Morihei Ueshiba developed about 200 self-defense forms, some of which he had learned from Takeda. In 1922 he organized his own style of aikijujutsu, which he called aiki bujutsu. He later used it as a starting point from which to create his own martial art. Morihei Ueshiba traveled to China twice to observe the Chinese martial arts, and he incorporated those ideas into his aiki bujutsu. In particular, experts have noted similarities with the internal teachings of tai chi chuan and pa kua chang.

In 1936 Morihei Ueshiba renamed his art aiki budo, and in 1942 he emerged with a mature, modified art—now officially called aikido. The new name is a combination of separate ideas: ai means harmony, ki means spirit or energy, and do means discipline. The master also added elements of other ancient martial arts, including swordsmanship and kito-ryu jujutsu, and included many martial arts techniques of his own. Emphasis was always placed on using ki to increase a person’s strength.

In his classes, Morihei Ueshiba discouraged his students from mimicking his movements and forms. Instead, he wanted them to practice a form so many times that it became part of their being. “Learn and forget,” he would say. “Make the technique a part of your body before you move on.”

Through aikido, Morihei Ueshiba developed extraordinary self-defense skills. He could take down and pin opponents of much greater size. He could throw a dozen men simultaneously. He ordered his students to ambush him from eight directions and easily manipulated them to his advantage while his feet stayed within a circle barely encompassing them.

It is reported that, in front of television cameras, Morihei Ueshiba challenged four men to lift him. Regardless of how hard they tugged, Morihei Ueshiba’s down-turned ki held him motionless.

Another time, Morihei Ueshiba wanted to demonstrate the positive attitude that ki creates. He told an audience that he could will himself to become two-thirds lighter than his own body weight. Twenty cups were filled with tea and arranged in a circle. He stepped up on the rim of the first teacup and walked around the circle of cups. When the circle was completed, not a drop of tea had been spilled nor was even one delicate cup cracked.

After suffering from periods of ill health over much of his life, Morihei Ueshiba succumbed to liver cancer in 1969. He was 86. “Aikido has no end,” he said before he died. “There’s just the beginning and further growth.” The founder of aikido may have passed on, but his art continues to thrive around the world.

(Jean Schaefer is a freelance writer based in Everett, Washington.)

SKU: 7d7688535098 Category: Everything Else Tags: Morihei Ueshiba, The Founder of Aikido
Share