Delivery : Instant Email Delivery
Origin of Civilization is digital course. We will delivery via your email with download links. You can online access with smart device or download to personal computer. 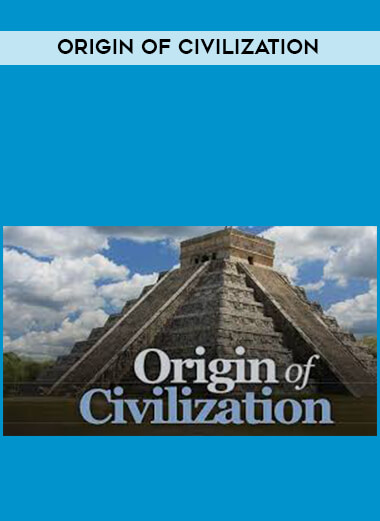 And yet the experience of living inside a civilization has become so interwoven with our lives that it’s easy to take for granted just how profound and recent the concept is. Consider that human beings have walked the earth for more than 150,000 years, but it was only 10,000 years ago that our distant ancestors began establishing and living within larger and more complex communities.

Our world is forever indebted to a host of early states that paved the way for our current ways of life, including those of the Sumerians, the ancient Egyptians, the Chinese, and the Maya. Without the critical strides they made in areas of government, law, trade, social hierarchies, culture, and more, human civilization as we know it today would not even exist.

How did these first states come into being?

What defines a state? A civilization?

How were the world’s ancient states similar to each other? How did they differ?

Answers to these and other dramatic questions form the core of The Origin of Civilization, a grand 48-lecture course that reveals the stories of how human beings around the world transitioned from small farming communities to the impressive cultural and political systems that would forever alter the course of history. Taking a gripping archaeological and historical approach to these formative states and civilizations, archaeologist and Professor Scott MacEachern of Bowdoin College completes your understanding of the history of human civilization-by exploring it at its earliest stages.

Unlike traditional survey courses of ancient civilizations, which tend to focus only on the glorious achievements of these cultures, The Origin of Civilization brings you those first all-important steps that the world’s first civilizations would take on the long and arduous road to glory. It’s only by learning about the birth of these complex societies that you’ll be able to better understand-and appreciate-the lasting contributions they made to the cultural record.

A Comparative Point of View

Contrary to popular belief, state formation didn’t happen in one area and then spread outward. Instead, the emergence of states and regional civilizations occurred throughout the ancient world, from the fertile valleys of the Near East and the savannahs of Africa to the Pacific coast of South America and the plains of China.

To tackle this diversity of early civilizations, Professor MacEachern’s lectures incorporate perhaps the most important element of any archaeological study of diverse states and civilizations: a comparative outlook. This all-encompassing perspective-which explores ancient cultures side by side instead of in a vacuum-allows you to better grasp the different (and similar) trajectories through which the first states formed around the world.

“We simply will not be able to assemble a complete and convincing account of ancient civilizations if we don’t understand how they developed through time in different environments and circumstances,” notes Professor MacEachern. “We must have that comparative point of view.”

What caused these new forms of cultural and political complexity to emerge in certain places and not others? How are the processes of state formation the same? How are they different? It is only with the comparative approach of The Origin of Civilization that you can truly begin to answer these and other profound questions about this transformative era in human history.

After a series of introductory lectures that draw you into the world of archaeologists and the issues and challenges of their field, you embark on a globe-trotting, time-traveling adventure in which you investigate the earliest examples of state formation. Here is where you plunge into the heart of this captivating new course.

You approach the growth and development of civilization in each fascinating region from a multitude of political, social, cultural, and spiritual perspectives. Covering the most vital regions in the earliest development of human societies, The Origin of Civilization takes you to places such as

Mesopotamia, where you explore the ways that agriculture laid the foundation for groundbreaking experiments in social and political development throughout the Near East in places like Uruk and Sumer;

the eastern Mediterranean, where you discover how expanding maritime trade during the Bronze Age increasingly knit the different societies of these islands into an integrated web of political, ideological, and economic relationships;

Asia, where you survey the evolution of China from early farming communities to literate states and dynasties and explore the ancient states of Southeast Asia, which developed distinct ideologies from competing Chinese and Indian influences;

Sub-Saharan Africa, where you join Professor MacEachern on a journey through the early communities and states of the Inland Niger Delta, the Lake Chad Basin, and the Zimbabwe Plateau-areas essential to the story of human civilization; and

Mesoamerica, where you comb through the indigenous states in and around what are now Mexico, Honduras, and Nicaragua, and witness the full flowering of Olmec and Maya civilization.

In these and other cases, your explorations bring you up close and personal with a host of intriguing topics central to the study of the world’s earliest states. These include issues of territoriality, cycles of rise and collapse, the development of writing systems, questions of archaeological interpretation, and much more.

With its rich and detailed archaeological approach, The Origin of Civilization also offers you an engaging look at what archaeologists have learned from some of the world’s oldest and most intriguing sites. You’ll see how these locations provide us with intimate windows into how ancient states developed and how everyday men and women lived within them.

Among the familiar – and perhaps unfamiliar-sites you explore alongside Professor MacEachern and some of history’s most important archaeologists are these:

The pyramids at Giza, the most striking physical manifestations of the power that ruling pharaohs held over dynastic Egypt

Eridu, a settlement near the mouth of the Persian Gulf whose temples and housing reflect the presence of social hierarchy and power

Knossos, whose grand palatial complexes have reshaped our understanding of political relationships between different ancient communities on the island of Crete

Erlitou, a 900-acre site that was China’s first true urban center and closely associated with the region’s semilegendary Xia dynasty

Great Zimbabwe, the only archaeological site in the world to have a country named after it, and one that helps explain the origins of territorial states in southern Africa

Teotihuacán, whose planned avenues and ceremonial centers imply a powerful central governing structure at the heart of this Mesoamerican capital

With more than 20 years spent as an archaeologist investigating sites in Cameroon, Chad, Nigeria, Kenya, Ghana, Canada, and the United States, Professor MacEachern is the perfect guide for this thrilling exploration of what archaeology reveals about the world’s first civilizations. His lectures, always rich with archaeological detail, will leave you awestruck at the diverse ways that ancient people crafted and supported complex systems; systems whose broad strokes remain with us even today.

And now you can finally grasp the full scope of this important subject in The Origin of Civilization, your in-depth look at the grand story of how humans laid the foundations for who we are today in the world. It’s an unforgettable story that involves looking at the past through a broad lens, rescuing from near-oblivion the physical remnants of early human history, and rediscovering stories and cultures you only thought you knew.

SKU: e8f3bb67b9f5 Category: Everything Else Tag: Origin of Civilization
Share