Delivery : Instant Email Delivery
Pickup lOl – Direct and Indirect Game is digital course. We will delivery via your email with download links. You can online access with smart device or download to personal computer. 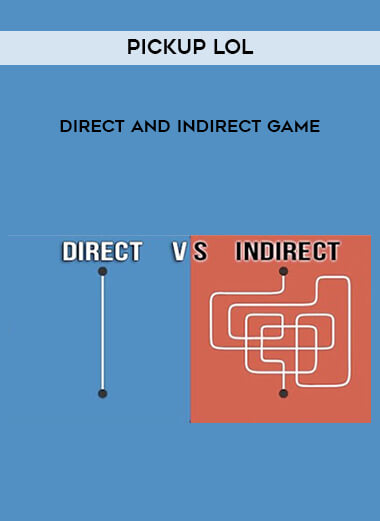 Of course, the other 50 times I asked women to have sex with me right off the open, it didn’t go quite so well.

1 out of 50 isn’t that bad – you could easily approach that many women in a single weekend. But, it goes without saying that you’d have a better ‘batting average’ if you used an indirect opener like, “Hey, do I look like a drug dealer?”

The million-dollar question, though, is whether direct game is more effective than indirect game.

I’ve heavily experimented with both types of game, and I have a satisfying answer to the question, “Which is better, direct game or indirect game?”
Direct Game: The Advantages

In dating, women rarely make the first move. So, you will miss countless opportunities unless you lead your interactions with women towards something sexual.

For example, when I was 19, I brought a beautiful girl into my bedroom for the first time. She gave me a sensual full-body massage.

Obviously, she wanted me to fuck her. But I was so afraid of rejection that I didn’t make a move. The next morning, she said, “That’s not what I was expecting to happen.” I never saw her again.

If I had been direct in my interest with that girl, we absolutely would have had sex. That’s the advantage to using direct game: when a girl does like you, you will make something happen.

Truth is, most men miss countless opportunities with women simply because they never make a bold move.

The basic strategy behind direct game is to let the girl know that you are attracted to her (I.E. “You’re very attractive.” If she reciprocates your interest, you’ve both consciously agreed that the nature of your relationship is sexual.

Direct game will instantly weed out the girls who aren’t interested in you. But in many cases, nothing was going to happen with them anyway, so you’re just saving time.

A certain percentage of the women you meet will have a strong natural attraction for you. Being direct with these women can be an effective, no-bullshit dating strategy.

I wish I had understood the merits of direct game in my teens. I missed dozens (if not hundreds) of opportunities with women because I just didn’t make my interest clear.
The Disadvantages of Direct Game

But, there is a problem with direct game – it forces women to make a snap decision about you. Many women will be fence sitters at first: they’re not sure if they’re interested in you (these are also known as “maybe girls”).

If a girl isn’t sure whether she likes you, and you are direct with her, she’s most likely going to reject you – because that’s the safer option.

Indirect game allows you to fly “under the radar” because you’re leaving room for the girl to doubt whether you’re interested in her.

Using indirect game allows you to cultivate attraction with women who at first have a lukewarm response to you. Once a “maybe girl” realizes your funny, confident, and charismatic, she’s going to become a “yes girl”.

Most of the beautiful women you meet are going to be “no girls” or “maybe girls”. Indirect game gives you the opportunity to date some of those women.

Indirect game also has an emotional appeal because it allows you to avoid rejection. If you tell a girl, “Hey, I think you’re beautiful, would you like to get coffee sometime?” She might reject you bluntly, (I.E. “Sorry, I’m not interested.”)

Whereas, if you approached her indirectly, she would have no reason to reject you. She’ll eventually say something like, “Oh, I have to go find my friends.” But that doesn’t have the same sting as the rejections you’ll get when you’re direct.

Ultimately though, rejection is unavoidable, and the best way to deal with it is to expose yourself to rejection until you become numb to it. One of the disadvantages of indirect game is that it doesn’t teach you to face rejection head on.
The Verdict: Direct Game Vs. Indirect Game

Direct game is a useful tool for getting some experience under your belt. If you’re an aspiring Casanova, direct game can help you make the most of your opportunities with “yes girls”.

Hypothetically, though, you can attract more women with indirect game, but to pull that off you must be comfortable with escalating your interactions sexually. For most guys that’s hard, making a move puts us in a vulnerable position. So, even when we think a girl likes us, we tend to play it safe (and ultimately, nothing happens with her).

Direct game can teach you to stop playing it safe, to take your interactions with women as far as they can possibly go. Yes, most women will reject you when you use direct game, but not all women will. And the women who respond positively to direct game will help you become confident in your sexuality.

Once you’ve gotten some success with direct game (I.E. you’ve hooked up with a few girls), then, you can learn indirect game so that you can start attracting “maybe girls”.

But if you try indirect game before you’re good at being direct, it’s very likely that you’re going to miss many opportunities with “yes girls” (I speak from experience).

If you’re a guy who gets nervous about leaning in to kiss a girl for the first time, or you have trouble escalating sexually when you’re alone with a girl, or you’re a guy who ends up in the ‘friend zone’ with women – then you should learn direct game, first.

Once you’re comfortable with being direct, then, you can benefit from learning and practicing indirect game.