Delivery : Instant Email Delivery
Rob Biernacki – The BJJ Formula is digital course. We will delivery via your email with download links. You can online access with smart device or download to personal computer. 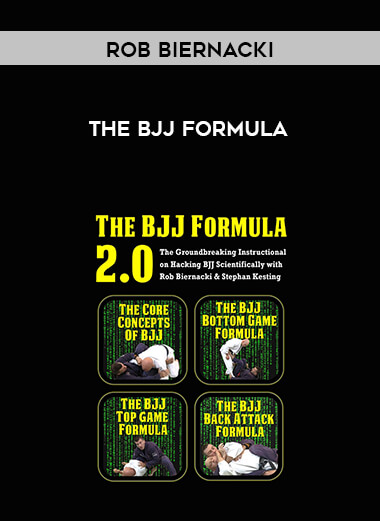 This is a totally revolutionary approach to BJJ that will allow you to hack Brazilian Jiu-Jitsu and become an effective grappler much faster.

In this set two experienced black belts take you through the most effective techniques in BJJ as well as the underlying concepts, breaking things down into bite-sized pieces making it easy to learn and retain the material

In The BJJ Formula you’ll get a step-by-step breakdown of the most effective techniques in Brazilian Jiu-Jitsu.  These are the exact techniques and strategies proven in the highest level competitions in the world.

But there’s a twist…

Yes, you’ll be learning lots of techniques in this instructional.  But the ‘glue’ that holds everything together, the thing that makes this material so quick to learn and easy to incorporate, is the emphasis throughout the set on the underlying concepts and principles of jiu-jitsu.

These concepts are the keys to the kingdom in BJJ.  If you learn the concepts that govern the top game, bottom game and back game then you’ll start getting better faster, retaining techniques easier, moving more efficiently, and start beating bigger and more experienced people.

Mechanical principles like leverage, framing and movement don’t change from position to position.  These principles are the same everywhere, and once you know them you can apply them throughout your game.

Every technique, every transition, and every strategy in this instructional is based on those fundamental principles.  We’ll show you exactly how those principles apply and how to use them so you can then apply them in other situations.

Jiu-jitsu isn’t some sort of magic and doesn’t require extreme strength, speed, or athleticism. Instead it’s a struggle between two people using positioning, leverage and momentum.

The person who uses these concepts better has a HUGE edge over his opponent in BJJ.

The BJJ Formula Instructional has more than 8 hours of instruction…

You’re covered by a unconditional, 365 day, all-your-money-back guarantee if you don’t like it for any reason.