Delivery : Instant Email Delivery
Robert Kiyosaki – Rich Dad’s You Can Choose To Be Rich is digital course. We will delivery via your email with download links. You can online access with smart device or download to personal computer. 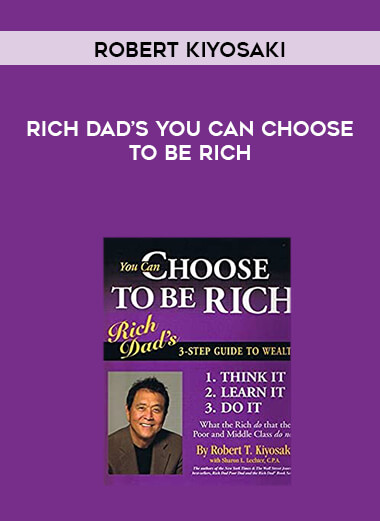 Salepage : Robert Kiyosaki – Rich Dad’s You Can Choose To Be Rich

Over the years, I’ve done a lot of research on the brain. The reason why I became so interested in the brain was because I often observed that people generally say one thing but do another. I was curious as to why this was the case.

For instance, I might ask a person, “Do you want to be rich?” His response would be, “Yes,” but instead of doing what is required to become rich, he will often do things that instead make him poorer, not richer.

An example of this would be a man who has a great investment opportunity with a great potential for return and instead saves his money and passes on the investment. Another example would be a woman who has a growing business that requires her to quit her job to go to the next level but instead closes her business and stays as an employee.

These are decisions ruled by fear, which is what often rules our brains. In my studies, I discovered that there are three basic parts to our brain.

This part of your brain is generally accessed for reading, writing, speaking, and logic. It’s the kids who do well in school that are left-brained. And left-brained people excel at such professions as writer, scientist, lawyer, accountant, and schoolteacher.

This part of your brain is generally accessed for pictures, art, music, and other things associated with creativity and imagination. Right-brained people don’t always excel in school because they don’t thrive in rigid environments. Designers, architects, musicians, and other creative are generally dominated by right-brain thinking.

The subconscious brain includes the “old brain,” often called the primitive brain and is most like an animal’s brain. Because of this, it’s the most powerful part of our brain.

Can you control the subconscious?

The short answer is yes.

Those with a high, intrapersonal intelligence have the ability to control their subconscious brain’s desire to fight, flee or freeze. They have the intelligence required to choose the appropriate subconscious response to a given situation. This means that if they’re angry, they can remain calm. If they’re afraid, they can confront and overcome their fear.

If you want to be rich, learning to control your subconscious mind before thinking and making decisions is vital.

Choosing to be rich

For example, I have an attorney friend who earned straight A’s at Harvard. He’s one of the smartest men I know. He wants to change, but he can’t. He wants to do something new, but he’s afraid of failing and not making enough money. He told me, “I’ve been an attorney for so long that I don’t know what else to do. Who will pay me what I’m making now?” He’s left-brained and controlled by his subconscious brain.

The problem for my friend, and for many people, is that he primarily spends his time with people who think, act and talk like him. He can’t stop thinking, acting and talking like an employee because every person and environment he engages reinforces the mindset of an employee in his subconscious.

In order for my friend to change his mindset, he must change his environment. The same is true for anyone who wishes to become rich.

I challenge you to choose to be rich today. Will you accept the challenge?

Readmore : Robert Kiyosaki – Rich Dad’s You Can Choose To Be Rich