Delivery : Instant Email Delivery
Ryan Jones – S7P Reloaded System is digital course. We will delivery via your email with download links. You can online access with smart device or download to personal computer. 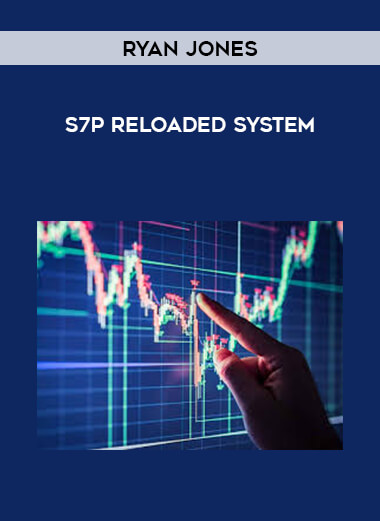 What I am about to give you is void of filler. Often times, trading strategies sold in the industry have 300 pages to say what can be said in 10. That is not what you are getting with this trading strategy. This strategy is being given with the assumption that you already have a working knowledge of the S&P E-mini market and trading in general. In short, the basics of trading the S&P and Emini are left out. This is not an education course on psychology, proper money management or any other element of trading. It is a manual that gives the rules, illustrations and explanations of a very powerful, yet simple trading strategy that has huge potential for consistent success in day trading. Having said that, what I am about to show you is not the holy grail. It is not some magical formula that holds the underlying framework of how the market moves. It is a strategy that has repeated over and over and over again for years and years. You can go back as far as you can imagine and you will see this pattern repeating itself. If it repeats itself over and over again, then why isn’t it the holy grail? There are two simple reasons, and if a trader will do what it takes to understand this (because it applies to all trading), they will be far ahead of the game.

First is that when a pattern repeats itself, it does not do so on a specific basis. In other words, the pattern is much like snow, fingerprints, etc. No two are exactly the same.

There are millions of variations and differences with each repeat of this pattern. It is IMPOSSIBLE to figure out how to take advantage of every single variation…and traders DRIVE THEMSELVES NUTS trying to do so. This is the problem with trying to create a 100% mechanical system. You are trying to include as many of those circumstances as you possibly can while trying to maintain the logic of the approach in the first place. Yet, all of your efforts will still produce an occasional loss even though the pattern occurred and in fact repeated itself. Second, there are simply times when it looks like the pattern is going to repeat itself, and doesn’t. In fact, there are types of market action that will produce several losses in a row because whatever is going on in the market is not conducive of the pattern repeating itself.

In short, when this system goes into a drawdown, don’t call me or email me complaining. On January 2nd, 2006, I am going to be implementing this system and attempt to beat my previous record and turn a $15,000 account into over $108,000 by March 31st, 2006 (previous record was just over $107,000 in less than 90-days). This is the system I am going to use because I believe it is the system that will give me the greatest chance for success. If it doesn’t work out, it doesn’t work out. If I go through a string of 10-losses at the maximum loss (3.00 points or $150 per Emini), then I am risking $1,500.00. If the drawdown continues, lets say to $3,000, this risk is still worth the huge profit potential it carries when combined with money management. The specific money management strategy that I will use is covered in the last chapter of this manual.