Delivery : Instant Email Delivery
SESSION GUITARIST – ELECTRIC SUNBURST DELUXE is digital course. We will delivery via your email with download links. You can online access with smart device or download to personal computer. 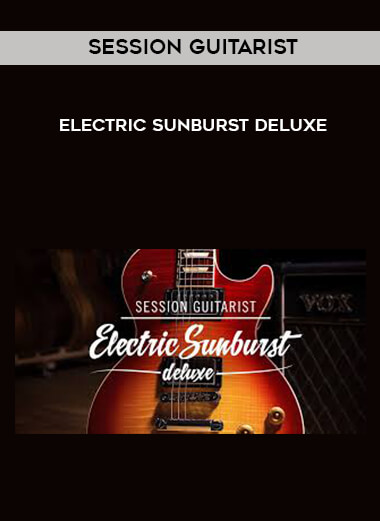 THE SESSION ELECTRIC PLAYER YOU REQUESTED

ELECTRIC SUNBURST DELUXE is a powerful, expanded version of the hugely popular ELECTRIC SUNBURST. This DELUXE instrument draws from the same meticulously captured iconic electric guitar and adds a wealth of user-requested features, including a second instrument for melodic playing, more patterns, enhanced performance controls, and new effects. With a fully versatile instrument, you can produce authentic, finished tracks for any modern production effortlessly

ELECTRIC SUNBURST DELUXE gives you two KONTAKT instruments for creating complete, authentic electric guitar parts. The pattern-based instrument lets you instantly generate riffs, strumming patterns, and arpeggios simply by playing a chord on your MIDI controller. The included melody instrument enables you to combine your own, freely playable melodies with the integrated patterns. Smooth transitions between melodies and patterns help you deliver unique, engaging electric guitar parts for any production.

ELECTRIC SUNBURST DELUXE captures an iconic electric guitar chosen for its rich, warm, and highly adaptable sound. A pristine signal path – including high-end cables, vintage tube preamps, and high-resolution converters – ensured that every nuance of this legendary instrument was accurately captured. With separate bridge and neck pickup samples, you can take full control of the mix balance. Blend in fine sonic details from a condenser mic mounted above the strings to add punch and realism to the performance.

Tap into 237 patterns, including realistic riffs, arpeggios, strummed intervals, and chords. ELECTRIC SUNBURST DELUXE adds new strumming and arpeggio patterns plus an assortment of reverse patterns to spark new ideas. With patterns grouped into song presets, you can immediately find what you need, whether you’re working on a pop production or electronic tracks.

ELECTRIC SUNBURST DELUXE offers an expanded range of performance controls to give you unmatched flexibility, realism, and tonal variety. Access thousands of loops, single notes, and noises over numerous fret positions – played both with plectrum and fingers in open, muted, flageolet and tremolo articulations. The DELUXE instrument adds real-time bending and vibrato controls – with multiple vibrato speeds – so you can add greater expression to your parts. Innovative pitch bend presets allow the bending of only selected notes of a voicing to emulate typical bending techniques.

An autochord mode and convenient voicing presets let you program or perform authentic electric guitar parts – even if you’re not a guitarist. Advanced voicing capabilities available with this DELUXE instrument let you explore new arrangement options.

ELECTRIC SUNBURST DELUXE features an improved playback and picking engine that lets you fine-tune the feel of your parts. Tuning, timing, and humanization settings help you create live-sounding performances that can work in any genre.

Second melodic instrument for creating your own melodies and patterns