Delivery : Instant Email Delivery
Sherm Cohen – Storyboard Secrets is digital course. We will delivery via your email with download links. You can online access with smart device or download to personal computer. 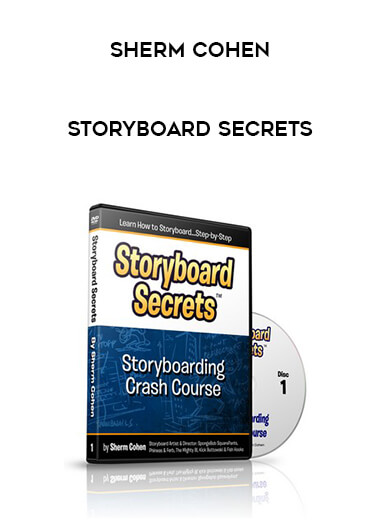 Attention: Cartoonists, Illustrators, Comic Book Artists, Modelers, Animators and any other artists who want to make money and a great living from your talent…

How can you do what you love and make a great living at the same time?

Be a Storyboard Artist!

Even though jobs are quickly vanishing for traditional animators and newspaper/magazine cartoonists, Storyboard artists are in high demand — more than ever!

Even the slickest CG-Animated movie uses hand-drawn storyboards. Look at any of the “Art of…” books about Pixar, Dreamworks, Sony and Disney movies and you’ll see that storyboards are still drawn like they’ve always been…

And that just for starters — As special-effects-driven blockbusters continue to dominate the box-office, storyboard artists are constantly needed to provide the “blueprints” and pre-visualization art those movies require. Action movies, video games, TV series and even commercials are hiring storyboard artists every day.

And You Already Have Half of What You Need

You already know how to draw, but the specific storytelling strategies, technical requirements and the specific challenges of the storyboarding format remain a mystery.Do you know how to do a hook-up? When to use a truck-out? an x-dissolve, a banana-pan or how to avoid a jump-cut?

I had never even heard of those things when I started — In these days of tight deadlines and even tighter budgets, on-the-job training doesn’t even exist anymore. When the studios need a storyboard artist, they don’t have the time or resources for training; they want someone that demonstrate today that they’ll hit the ground running and start pumping out killer storyboards from the first day on the job…

…Are You READY To

You will be when you discover Sherm Cohen’s

And You Can Get Started TODAY…

To get you moving on the right road,

All videos available INSTANTLY to you online…and shipped to you on DVD via Priority Mail!

It’s the real stuff you can’t learn from a book!

Choose the best angle for your shot. Lots of tips and shortcuts to make it quick and easy.

How To Use The Moving Camera & Transitions to Strengthen Your Story

…And that’s just the first half of the course!

Listen to what recent customers have to say…

Before time slips by I just wanted to thank you for promptly sending out the DVDS! You rock! The examples you show thus far are super clear and easy to understand

Most of my questions have been answered so far and I’m only on Disc 5!!!!

I’m making a 3 minute film on my own and it’s been a battle every inch of the way. Your discs have saved me, man. I was moving in slow motion. Thanks again!”

“I learned more in 2 hours than one year in Art School and I still owe them 50,000 dollars.

Thank you for sharing your knowledge and please let me know if you would ever do a workshop here in New York in the future!”

Just wanted to take a minute and say thank you for the great job you did teaching on your DVD set. Excellent resource!

EFX Supervisor at Omation “The Barnyard”

“Before You Start Drawing”

This Is The Stage Where Some Big Factors Come Into Play:

As The Deadline Crunch Approaches, Use These Proven Shortcuts To Get Your Board Done On Time

“How To Get A Job

Here’s what storyboard artists are saying about Sherm’s storyboarding Courses:

“Where was this when I was at Cal-Arts? Where was it when I started my storyboard career? Great job!”

“I’ve learned some of these storyboard techniques from various directors over the years only to find out that they learned them from Sherm Cohen.

This guy really knows his stuff!”

“The storyboard principles Sherm taught me landed me my first job; doing boards at Nickelodeon.

You won’t find this information anywhere else”

After starting out as a comic book artist and magazine gag cartoonist, Sherm Cohen entered the animation field as a character layout artist for The Ren & Stimpy Show.

Sherm storyboarded at Cartoon Network Studios and Warner Bothers before moving to Walt Disney Studios to write and draw storyboards for Phineas and Ferb, Kick Buttowski and Fish Hooks. In 2013 Sherm returned to Bikini Bottom as Sequence Supervisor for The SpongeBob Movie: Sponge Out of Water. He is currently Supervising Director on the brand new seasons of SpongeBob SquarePants.

Sherm Has taught storyboarding at CalArts, Woodbury University and The Disney Creative Academy. Sherm’s tutorial DVDs are being used my animation studios around the world, and in schools including San Francisco’s Academy of Art University, The Columbus College of Art and Design, USC School of Cinematic Arts, Art Institute of Indianapolis and Ringling College of Art and Design.

for his work on Kick Buttowski at Disney TV Animation

Really, REALLY great content! Pretty much anything you would want for television storyboarding.

After I watched #1 I was like, “That was great, but how can he expand on this for 8 more DVDs?” and then I watched #2. Wow. So simple, and yet…not. I’m really excited to start putting this info to work. I like your teaching style!“

I already got some great nuggets outta it. Thanks Sherm, you’re a champ and a really nice dude. Keep up the great work!”

I finally had a chance to review and digest all the 10 DVDs and found the contents awesome.

Since I am mostly doing storyboards now they were a great help specially the one on thumbnails.

Chapters on screen direction and perspective were great too. Of course I had been exposed to the basics before but overall I found them very informative and loaded with very important tips. I plan to show them to my storyboard crew here too. $33.00
Delivery : Instant Email Delivery Adam Hayes Corey Wenger - The 25 Best Sleep Hacks for Better Sleep is digital course. We will delivery via your email with download links. You can online access with smart device or download to personal computer.
Add to wishlist
Enroll Course
Quick view
-84% $93.00
Delivery : Instant Email Delivery Quantum University - World Congress 2014 is digital course. We will delivery via your email with download links. You can online access with smart device or download to personal computer.
Add to wishlist
Enroll Course
Quick view
-66% $33.00
Delivery : Instant Email Delivery Elizabeth Benton - Overcome Emotional Eating & Self Limiting Behaviors is digital course. We will delivery via your email with download links. You can online access with smart device or download to personal computer.
Add to wishlist
Enroll Course
Quick view
-67% Gray Cook – Secrets of the Shoulder

$33.00
Delivery : Instant Email Delivery Gray Cook - Secrets of the Shoulder is digital course. We will delivery via your email with download links. You can online access with smart device or download to personal computer.
Add to wishlist
Enroll Course
Quick view
-74% $33.00
Delivery : Instant Email Delivery Elena Seranova - Beat Depression by generating Happiness habits is digital course. We will delivery via your email with download links. You can online access with smart device or download to personal computer.
Add to wishlist
Enroll Course
Quick view
-67% $33.00
Delivery : Instant Email Delivery Anat Baniel - NeuroMovement for Whole Brain and Body Fitness is digital course. We will delivery via your email with download links. You can online access with smart device or download to personal computer.
Add to wishlist
Enroll Course
Quick view
-67% $33.00
Delivery : Instant Email Delivery Allan Menezes - A-Z Of Pilates 3 DVDs Set is digital course. We will delivery via your email with download links. You can online access with smart device or download to personal computer.
Add to wishlist
Enroll Course
Quick view
-67% $33.00
Delivery : Instant Email Delivery Think Vitamin jQuery is digital course. We will delivery via your email with download links. You can online access with smart device or download to personal computer.
Add to wishlist
Enroll Course
Quick view
-73% Boxing Mastery: Learn from a Trainer of Champions

$43.00
Delivery : Instant Email Delivery Boxing Mastery: Learn from a Trainer of Champions is digital course. We will delivery via your email with download links. You can online access with smart device or download to personal computer.
Add to wishlist
Enroll Course
Quick view