Delivery : Instant Email Delivery
Spitfire Audio – eDNA 01 Earth is digital course. We will delivery via your email with download links. You can online access with smart device or download to personal computer. 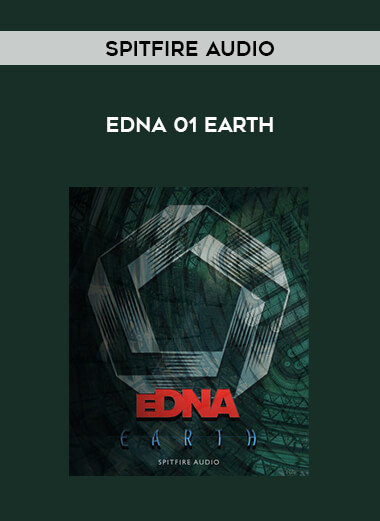 Phase #1 ‘EARTH’ is a collection of 1900+ basic instruments mangled into 1001 custom patches by our award winning team of composers, sound-smiths, producers and engineers into a collection of play-out-of-the-box “cartridges”. Load up eDNA, with an award winning interface, slam in a cartridge and play play play. Such is the depth of content here that if you were to play each sound for 30 seconds, it would take you exactly 24 hours to listen to every instrument and patch… And that’s without fag and loo breaks. We’re not ambulance chasing here, this is not about the music of now, of yesterday, this is a new chapter, a new sonic arsenal.

Included with the EARTH pack are 1900+ and 1001 custom patches that spring out of the box and bite.

We have been recording the finest orchestral players for seven years now. We have been practising our craft in the creation of the finest strings, brass, woodwinds and percussion libraries. But throughout this period, we have also been harbouring a darker ambition. As many of us here at Spitfire come from the first wave of UK EDM in the 90’s we have hungered to get our hands on these awesome sounds for our own ill gotten gains. For the last seven years there has been a secret hard drive, a depository of the best of these orchestral recordings saved to create the ultimate raw material, the ultimate ore, a set of polished diamonds waiting to be roughed up all over again.

For the last 5 years we have been experimenting with orchestral warping and many of these early attempts have been enjoyed by a large group of users using the beautiful and sometimes downright dirty “Stephenson’s Steam Band” sections of our Albion range. In these early years we set about finding the most rarefied analogue outboard equipment, synths, filters, gates, verbs, and also commissioned and created a rare set of bespoke digital signal paths. At regular points over the last few years we have taken our secret drive out of it’s secret cupboard, pulled the sounds up and fed them through these multi stage signal paths. We often left it simmering overnight, creating the most delicious and sometimes just ‘wrong’ set of sounds.

During the warp stage we created well over a terabyte of data. Needing to cut this down to a reasonable size, the Spitfire team of multi award winning composers, producers, techs and engineers set about pairing this down to the very best of the best. From this we created a set of multi-sampled Sound-Sets. The very building blocks of ‘Earth’ itself. These were then organised by sound-type into manageable Sound-Banks.

Over the last seven years Spitfire – in partnership with Blake Robinson – have been creating intuitive and ingenious scripts, simple to use GUIs and attractive front ends. A year ago, we wiped the script clean and set about creating a monster of a new script engine. This we call eDNA. With more details to follow, we will show how the sound sets and banks of ‘Earth’ can be used in conjunction with the eDNA engine to quickly, dramatically and awesomely customise sounds beyond recognition.

Once the sound banks were implanted into eDNA, we distributed ‘Earth – Beta’ around our state-of-the-art complex in Central London, UK. Spitfire is a team of award winning composers, producers, track makers, and engineers. Using this pedigree, we have created a jaw dropping number of the original, haunting, beautiful, epic, angry, fat and down-right unpleasant sounds. We ignored the zeitgeist, we ignored what’s been before and just set about creating something new. With eDNA’s delightful GUI, this uncharted territory of new sonic experimentation is one knob or slider away from making it your own. Or simply start from the “vanilla” sound-banks, roll your sleeves up and give eDNA a tickle.

1900+ Factory instruments and 1001 custom patches designed by our award winning team. Organised into virtual cartridges, slam one in and play play play!

Imagine the eDNA engine as a set of two turntables and a massively complex DJ mixer. It contains two sound bays with individual and independent modulators, control of trim, bend, glide, cloning, tuning, ADSR and lpfs and hpfs and wobbles that modulate pitch, volume and filters.

There is an onboard gate sequencer that allows independent gating between these two bays and unified control of amount, and shape, speed and length of sequence.

These two signals are then at last unified with a DJ style x-fader. Move between the sounds with the mouse or the factory-default assigned modulation wheel. But it doesn’t stop there. We’ve designed a custom script that oscillates the x-fader automatically with control over speed and phase.

Last but not least is eDNA’s five stage FX path with 34 custom plugins (including a bunch of bespoke IRs) pre-loaded. There are two “layer fx” stages that effect sound A or B. A “motorised” FX stage that can either effect A, B or both. A master FX stage that effects the entire output. Finally an auxilliary FX stage that can be sent via the layers or master FX stage. Any parameter of these can be assigned for automation or assignment to your controller. See this diagram to understand eDNA’s signal patch more fully:

WELCOME TO THE WONDERFUL WORLD OF THE eDNA ‘CARTRIDGE’

“Earth” is an anthology of 1900+ vanilla instruments and 1001 custom patches in our ‘artist’ collections. If you were to spend no more than 30 second listening to every sound on Earth (excuse pun) it would take you 24 hours of solid listening, without fag or loo breaks. To make sense of this awesome arsenal of sonic weaponry we’ve organise everything into cartridges. With the artists we have briefed them on a sonic “style” with our factory cartridges we have largely organised by type of sound and have released our first “best of” compiled by Christian Henson the chief curator on the Earth project.