Delivery : Instant Email Delivery
Spitfire Audio – Enigma 2 The Rapture is digital course. We will delivery via your email with download links. You can online access with smart device or download to personal computer. 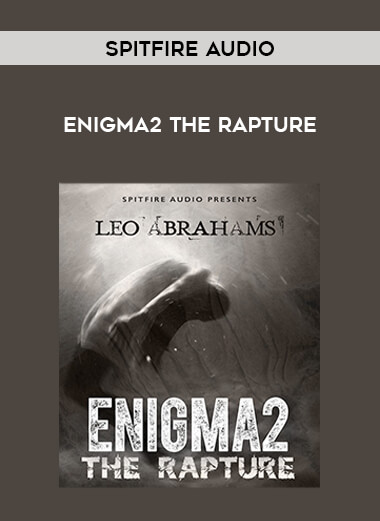 A deep-sampled library of distorted beauty, that captures Leo’s incredibly cool aesthetic, presented in different forms to give you a multitude of options. An enormous variety of articulations, via Leo’s enviable guitar collection, his candy store pedal board and a host of different vintage amps and signal paths recorded at London’s ultra cool Pool Studios.

Augmentations – Along the lines of the original Enigma, 24 inspiring dedicated Mercury “synth” sample sets again each with 6 unique amps.

Leo Abrahams follows up his Enigma hit of 2013 with an apocalyptic selection of distorted instruments and walls of sound. Layer into your mix for the ultimate in distortion & feedback. We decamped to Pool Studios, Bermondsey (London) for weeks of plundering Leo’s unique and rare collection of instruments, pedals and amplification. Where the original Enigma is a relatively small boutique selection of awesome sounds, “The Rapture” is a deep-sampled treatise on the art of distortion, feedback, filth and squalor.

– If you’re a producer looking to add that edge to your music then this is a must-have for your arsenal: anything it touches gains a white-hot zeitgeist edge.

– If you’re a writer in need of that spark of inspiration both Enigmas are “inspiration machines” which can instantly feed your imagination.

– If you’re a composer looking to employ distortions on your scores, whether it be for film, TV or games, you can now do this with confidence. No more lame distorted guitar sounds!

Leo Abrahams is a trailblazing musician, composer, and producer who has recorded and toured with such successful artists as Imogen Heap, Ed Harcourt, Roxy Music, Grace Jones, and Pulp. Leo began to write and produce for a catalogue of aspiring singers and bands, which led him to creating his own records including The Unrest Cure, featuring the vocal stylings of Brian Eno, KT Tunstall, Ed Harcourt, Foy Vance, and Bingo Gazingo. Leo has produced for a number of artists including Regina Spektor, Paolo Nutini, Wild Beasts, Frightened Rabbit and Carl Barat of the Libertines. He has composed such incredible soundtracks as that of The Lovely Bones (with Eno) and Hunger (with David Holmes) and he is also credited as the guitarist in such fantastic film scores as that of ’71, Oceans 12, Twilight and Green Zone. Leo’s talent has extended across multiple genres of music, and it is his devotion, along with his raw talent that has brought him the success he has today.

He had this to say about “The Rapture”:

“When I’m writing, I often build a sound first and let the composition evolve from it. I hope that some of the guitar sounds on offer here will inspire other people to do the same. I also hope that some of the ambient sounds are helpful when what’s needed is neither a synth pad nor an actual ‘part’, but just a bit of atmospheric ambiguity (or ambiguous atmosphere, depending on whether it’s a sci-fi thing or a costume drama).

With this library, I hoped we could capture a sense of danger and abandon, which it is often the guitar’s job to impart. There’s also such a wide variety of emotions and textures available from different fuzz boxes and guitars – I find I hear far too many guitar tones in soundtracks that sound generic and cheesy. I wanted to put the product of my compulsive years of eBay scouring at people’s fingertips.

When I was playing on David Holmes’ soundtrack to Oceans 12, he sent me round every guitar store in LA buying vintage fuzzes until we found the right tone for a particular cue. It took 2 days, and one of the VI’s is from that very stompbox.

So it’s partly intended as a gap-filler in people’s toolboxes, and partly as an inspiration machine. If you decide to investigate, thanks in advance.”

As Enigma 2 contains various different articulations and pickup choices, we have designed 5 new icons to easily distinguish between the main articulations found in the library.

Anytime you see these icons with A, B or C inside, these are different pickup or playing position options of that articulation, which will have a slightly different tone.

The library is split into 3 distinct sections: “Distortions”, “Augmentations” and “Evolutions”. The Distortions are the core of the library with a 167 articulations spread across 18 different guitar pedals. The sounds are divided by pedal and contain 6 different signal options giving a variety of mixing options.

The 6 different signal options available include a pure DI straight from the pedals, to 4 different amps and finally a stereo room pair that allow you to add the ambience of The Pool recording studios. The 4 different amps available have been hand-picked to give a variety of sonic options. The first amp (“Cl” on the GUI) is a Showman, with a clean feed of the guitar before any of the pedals to add the pure tone of the guitar. The next 3 are where you get to the core of the matter with 3 different options all straight from the distortions, with the first being a Klemt Echolette M40 into a Selmer cabinet, the second a Bassman, and the third a Swart Space Tone.

The Augmentations are 24 unique sounds crafted by Leo himself using his curated pedal board, ranging from deep bass tones to enveloping pads and textures. These all contain the same 6 signals as found in the Distortions but are all hosted in our Mercury engine where users can develop the sounds further with in-built effects.

Last but not least are the Evolutions, based on our Evo Grid range, containing 16 different sounds spread across the keyboard which can be randomised to build complex moving sounds. All built with distortion and feedback in mind, these sounds evolve from a soft distortion up to screaming feedback and down again. These all have 4 different signal options, which are the 3 ‘dirty’ amplifiers mentioned above as well as the room signal.

A deeper but still simple UI panel that allows you to tweak the general settings. How many round robins you would like and how you would like them to behave. How would you like memory to be organised alongside pitch options and how velocity works.

The mercury synth is the front end for all of our steam punked, sound designed and warped section of any library. It is an ingenious user interface that allows you to have instant fun without having to roll up your sleeves and go under the Kontakt hood. All of the controls are assignable to your control surface giving you the immediate ability to make our sounds your own.

Based on the EMS VCS3 synth, this extraordinary and unique interface allows for instant gratification, customisation. With 1 or 2 clicks you will be armed with something totally unique and inspiring. Scroll the Evo Grid to discover and activate all 48 Evos. Pan and tweak each Evo for perfect blending punch in or out 3 useful modulators and effects, mix your mic positions all from the front panel.