Delivery : Instant Email Delivery
Stephen Whittier – Top Game Domination Mixed WEB Rip is digital course. We will delivery via your email with download links. You can online access with smart device or download to personal computer. 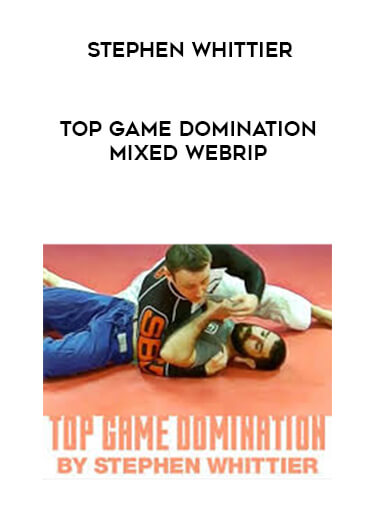 Once you’ve taken cross-sides position in Jiu-Jitsu, one the critical skills necessary for maintaining your position and successfully attacking your opponent is your ability to “kill” (or take out of play) your opponent’s near side arm.

In this volume you will learn exactly how to isolate anyone’s arm – even much stronger opponents – using minimal movement and only your body weight, then lock in super high percentage submissions. Best of all, even if you don’t finish with the attacks you’ll learn the first time, you never lose your position!

Learn the most common methods for killing the arm – and how to take advantage when your opponent knows them.

The one-step trick to eliminate your opponent’s lever against your neck when he has posture on bottom (never move because of that forearm in your throat again!)

Discover the specific details of positional maintenance once you’ve killed your opponent’s arm so they CAN’T get it back.

Learn what’s arguably the GNARLIEST positional submission in the game (it’ll make the guy on bottom feel like he’s tied up in a barbed wire straightjacket).

Know exactly how to maintain position when your opponent creates space and gets an underhook – it’s easier than you think but you have to know where to put your arm immediately!

Discover the Hip Slide arm killer method – so simple and effective you’ll wonder why you’ve bothered doing anything else from side top!

Learn how to shut down the movement of even the squirreliest grapplers as you slowly work your way to the tap.

Many grapplers steer clear of the mount because of the threat of losing position, but this position is know to be the most dominant position (along with the back) for a reason! Learn how to maintain position, wear your opponents down as they carry your weight, and continue to attack over and over again until you get the tap!

Take the guesswork out of positional maintenance – once you get this, you won’t fear getting rolled again!

Feel like it’s too hard to get the tap from mount? Not anymore… You’ll learn the unseen details to beating your opponent’s frames with your hips and angle (ninja stuff!)

Discover the importance of head control in the mount – when to use it, and why it’s so important to advancing your position.

The most common mistakes in getting and maintaining the S-Mount position (not knowing these will get you rolled before you can ever hope to get a submission).

Learn the ultimate head down mount cross-face (hint: the pressure will set you up for a very sneaky and effective choke!)

The lower body secrets for killing your opponent’s bridge.

The little known details that will make the arm triangle one of your most successful submissions!

No other Jiu-Jitsu artist in modern times has been more devastating from the mount position than Roger Gracie, one year sweeping both his weight class and the black belt absolute all with cross choke finishes from mount. This volume is all about giving you the tools to play from this position and have all the strongest chokes at your disposal.

Learn the “secret” pressure that will make – or break – your chokes from this position (hard to see but your opponent will feel like you’ve parked a truck on his chest!)

The sneaky detail to getting your fingers inside the collar – even when your opponent is holding onto your wrist for dear life.

Learn how to use your offensive to maintain AND improve your position to high mount.

Getting to the “inverted closed guard” posture (and make ’em feel like their body is locked in a vice as you attack)!

Discover the most common mistakes even many higher belts make on their cross collar chokes (you’ll learn every nuance from grip alignment, wrist angle, and down to your elbow position).

Why the level of your head as you choke is crucial to your ability to finish without getting rolled.

Discover all the primary variations of the the classic X-choke, PLUS the ultra-nasty elbow frame variation.

Learn the sneaky-and-brutal “Double Palms Down” choke, and the key weight-loading detail that will make your opponent’s eyes popping out!