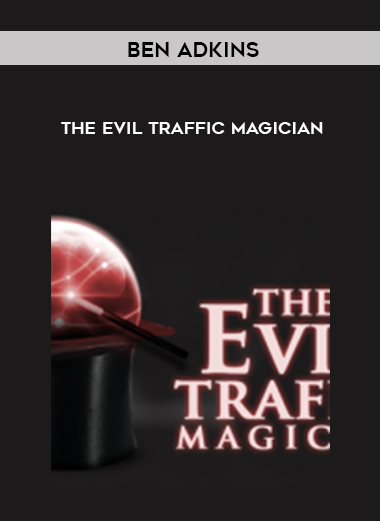 The Evil Traffic Magician showcases several powerful traffic techniques and gives a detailed plan on how to use them to gain sales every month. The course details several different methods for getting targeted buyer traffic in any niche. It also shows them how many sales to expect from each method (and how much time to put into each).

All the Traffic in the world is useless if you’re not getting traffic that is interested in your offer. In this section I’ll go through exactly how we end up finding the right traffic using a Research Process that is so systemized and Powerful that it seems like Mind Reading.

This section will get everyone in the program ready for all the traffic methods coming in Part 2 and 3.

In part 2, I’ll be taking your customers behind closed doors with some of the world’s top paid traffic magicians.

In each session your customer is going to be able to spy on the magician as they hook me up with a paid traffic trick that no one else has ever seen before.

Some of the Paid Traffic Tricks We Give:

The Banner or Bust Trick

and A lot More.

In part 3, I’ll be taking your customers behind closed doors with some of the world’s top free traffic magicians.

In each session your customer is going to be able to spy on the magician as they hook me up with a free traffic trick that no one else has ever seen before.

In the past 4 years I’ve interacted with some of the worlds top traffic experts on the planet at private gatherings, parties, and dinners.

When I started putting the Evil Traffic Magician together I picked up the phone and asked my genius friends to contribute their top traffic technique to the course.

Everyone I asked Agreed to Share their Best Stuff.

(and you get to spy on them teaching me)

Dr. Ben Adkins went from a struggling new chiropractor, praying for new patients to walk through his door – to within six months, having to hire more help because patients were busting through his door. Now he’s helping thousands of Entrepreneurs apply the same proven principles that got him there.
Readmore: Ben Adkins Sales U by Jack Daly