Delivery : Instant Email Delivery
Timothy Taylor – Unexpected Economics is digital course. We will delivery via your email with download links. You can online access with smart device or download to personal computer. 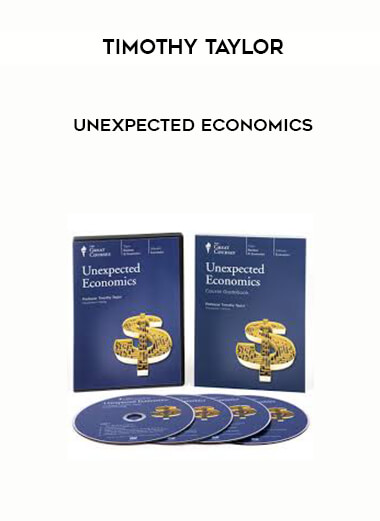 Why are we choosing to have fewer children, even as we put more time into raising each one?

Why are we so often willing to follow the herd and the opinions of strangers when making important decisions, even when those decisions are deeply

Why do people bother to vote in elections even when they believe their vote can’t possibly influence the outcome?

Most surprising: Why are questions like these increasingly attracting the attention of economists?

Economics is a field most people think of as having to do with international trade balances, gross national products, unemployment projections, and other issues involving our own finances, our country’s, or the world’s. In recent decades, though, economists have been turning their lenses on issues well outside these traditional boundaries, focusing on one “unexpected” subject after another. They’re asking how we choose our spouses, for example, or why we select particular places to worship, or what goes into our decision to designate ourselves as organ donors on our driver’s licenses. Indeed, the latest thinking to come from the field of economics can offer us a fresh perspective on every area of life in which the interactions of personal choice, motivation, and perceived outcome-the very heart of economics-play essential roles.

The 24 fascinating lectures of Unexpected Economics will help you grasp as never before the ways in which these mechanisms for making choices operate even in areas in which you may never have considered the forces of economics to be at work. Delivered by acclaimed economist and popular Great Courses Professor Timothy Taylor-managing editor of the Journal of Economic Perspectives, the most widely distributed journal of academic economics in the world-Unexpected Economics puts to rest the oft-quoted misconception of economics as “the dismal science.” Instead, you’ll take part in a wide-ranging and enjoyable investigation of how economic thinking-whether applied personally, nationally, or globally-relates to, and sheds fresh light on, just about everything.

Using findings from recent Nobel Prize winners and rapidly evolving leading-edge fields like behavioral economics, Professor Taylor looks at subjects ranging from discrimination and natural disasters to charity and risk-taking, and even whether terrorism can be considered a “career choice.” As you roam with him across this fascinating landscape, you’ll discover unique vantage points from which to survey and understand these exciting and vital territories being explored every day by economists. And you’ll gain a deeper understanding of the role of choice in your own life, whether choices you’ve made for yourself, or those made for you by leaders you’ve entrusted with that authority.

Broaden Your Net of Choices

It’s no accident that economists’ recent and growing attention to an increasingly broader range of topics has produced not only a variety of international honors and recognition within the discipline but also popular best-selling books. And there’s no arguing with how the resulting insights and findings have radically changed our thinking about how and why decisions-whether personal, national, or global-are made. Or how they can give anyone in a position to make or evaluate those decisions a powerful tool for “broadening the net” of choices and determining the best course of action.

It’s the holiday season and you’re gift shopping. How useful might it be to really understand why a particular person is on your list, and what motivations for giving might truly be in play as you make your selection?

A government official is charged with addressing the tremendous shortage of available kidneys for those desperately needing a transplant. What factors go into designing a policy that will not only satisfy the needs of new donors, but also those of the political players whose approval is needed?

Every four years, the Olympic Games present a global stage for athletic competition. But they are also just as much a cooperative endeavor. What factors go into striking the right balance needed to ensure success? And what lessons do the Games hold in enhancing our understanding of that same competitive-cooperative balance in business and work life?

A Fascinating Look at the Hidden Role of Economics

Teaching in a friendly style, Professor Taylor offers numerous examples of the hidden role of economics-with its constant dance of incentives and tradeoffs-in every aspect of life, including these:

A provocative look at obesity in America, including the counterintuitive role of income, the impact of five key food preparation and preservation technologies, and some surprising revelations about who really bears the costs obesity imposes on society

How changing mores have made once-deplored markets and economic transactions acceptable, from surrogate pregnancy to the purchase of life insurance, a practice once believed by some to be elevating oneself above God

The changing economic and social forces that have altered the balance of incentives for men and women when it comes to marrying versus remaining single, how many children to have, and whether to seek a divorce

A masterful economist with a powerful ability to explain the particulars of economics in commonsense language, Professor Taylor is the consummate guide for this fresh perspective on the relationship between economics and your world. With the same engaging style that has earned him teaching awards, he illustrates one of the main takeaways from Unexpected Economics: That in a world in which each of us is constantly seeking to balance our wants and needs, the key elements of the economist’s worldview are always with us-and always worth noticing.

Drawing on everything from psychology, history, and political science to philosophy, statistics, and game theory, these lectures are an enjoyable and rewarding way for you to learn how economics is rooted in seeking to understand not just trade and finances but the essence of how and why human beings make actual decisions.