Delivery : Instant Email Delivery
TTC Video – Foundations of Economic Prosperity is digital course. We will delivery via your email with download links. You can online access with smart device or download to personal computer. 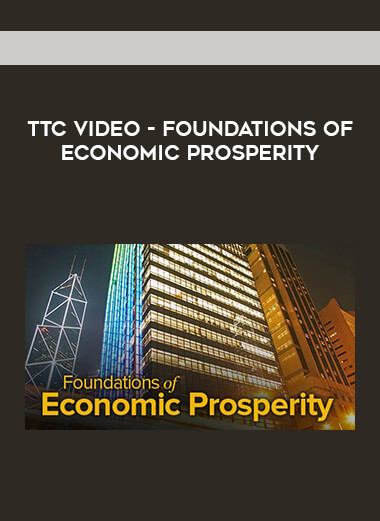 Prosperity has transformed the world. Defined as the ability to afford goods and services beyond basic necessities, prosperity is now a way of life for most residents of developed countries—so commonplace that few people realize what a rare and recent phenomenon it is.

A mere two centuries ago, most people lived at a subsistence level, in or near the edge of poverty, as the overwhelming majority had since prehistoric times. Then the Industrial Revolution began and per capita income shot up. It is still rising today.

But the story of prosperity is far from simple—or complete. Many people in the developed world fear that their children will be less prosperous than they are. Meanwhile, new economic titans such as China and Brazil enjoy year after year of rapid growth and an ever-rising standard of living. Elsewhere in the world, millions are still trapped in poverty, despite the best efforts of organizations such as the World Bank to help lift them out of it.

Fostering and sustaining economic prosperity—whether at the individual, national, or global level—is a multilayered endeavor that reaches far beyond economics into the political and social spheres. The complexity of the phenomenon raises equally complex questions:

Foundations of Economic Prosperity gives you an unrivaled overview of one of the most pressing issues of our day, in 24 half-hour lectures taught by Professor Daniel W. Drezner of the prestigious Fletcher School of Law and Diplomacy at Tufts University. Professor Drezner takes you behind the headlines and into the debates to dispel some common myths about prosperity and get at deeper truths.

In this stimulating, wide-ranging course, Professor Drezner shows that achieving prosperity involves more than economics. Psychology, sociology, political science, and history also come into play. By taking this broad view, he leads you to fundamental insights about how the modern world works and a deeper understanding of the functioning of the U.S., European, Chinese, and other major economies, as well as an appreciation for the special problems faced by underdeveloped nations.

Mysteries and Myths of Prosperity

Foundations of Economic Prosperity begins with an explanation of basic economic concepts. These are then applied to an increasingly wider sphere, covering prosperity on individual, national, and global scales. Noting that prosperity is surprisingly difficult to understand, Professor Drezner addresses some of the mysteries that surround the subject, including these:

In his quest to uncover the principles that guide the accelerating improvement of material life, Professor Drezner also refutes widely believed myths about prosperity, among them:

Foundations of Economic Prosperity follows dozens of case histories that illustrate what works and doesn’t work in the drive to increase economic growth. A superb storyteller, Professor Drezner reaches back to examples such as the statue-building culture of Easter Island that prospered centuries ago, until its mammoth public-works effort destroyed the island’s ecosystem—a cautionary tale to all developed societies. In another lesson from the past, Professor Drezner describes the economic policy called mercantilism that trapped European powers in growth-killing trade practices from the 16th to 18th centuries.

You will also learn about the following intriguing examples of prosperity won or lost:

Prosperity Tips You Can Use

How can individuals capitalize on long-term trends in the growth and distribution of prosperity? Professor Drezner—whose experience extends beyond academia to include positions with the U.S. Department of the Treasury and the RAND Corporation, as well as extensive international travel and consulting—is full of insight on this question. He suggests, for example, that developments since 1980 underscore the increasing importance of human capital over physical capital—the value gained from investing in people over physical assets. Human capital is the product of education in all its forms, from elementary literacy to job training to undergraduate and graduate studies, and it is more important than ever to a person’s economic prospects.

As a start on your own road to greater prosperity, take this step to invest in an unparalleled explanation of the prerequisites to achieve it in the Foundations of Economic Prosperity.