Delivery : Instant Email Delivery
TTC Videos – Great Ideas of Psychology is digital course. We will delivery via your email with download links. You can online access with smart device or download to personal computer. 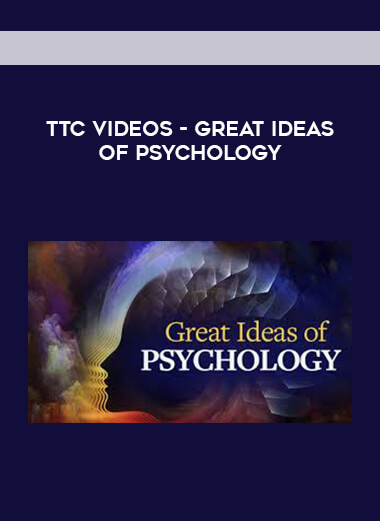 If you’ve ever wanted to delve more deeply into the mysteries of human emotion, perception, and cognition, and of why we do what we do, this course offers a superb place to start. As you hear these lectures, you hear the entire history of psychology unfold. And you learn that the subject most of us today associate with names like Sigmund Freud, Carl Jung, and B. F. Skinner really began thousands of years earlier.

In the hands of Professor Daniel N. Robinson, this course roams far and wide, encompassing ideas, speculations, and point-blank moral questions that might just dismantle and rebuild everything you once thought you knew about psychology.

In fact, you not only learn what psychology is, but even if it is, as Professor Robinson discusses the constantly shifting debate over the nature of psychology itself.

You see one school of thought after another enter the fray, trying to determine how this strange thing called the human “mind” is to be understood, studied, and treated:

It’s a debate that has raged for centuries, and to take this course is to see the question and its implications with a new clarity.

A Multidisciplinary Teacher of Exceptional Skills

Originally trained as a neuropsychologist, Professor Robinson’s decades of lecturing and distinguished scholarship have also established him as an authority in the fields of philosophical psychology, the history of psychology, and the junction of psychology and law.

So it is no surprise that he brings clarity, coherence, and comprehensiveness to this stimulating treatment of psychological speculation, debate, and investigation through the ages.

We think you’ll agree that he has crafted a fascinating and immensely thought-provoking course—one that is philosophically well-grounded, scientifically informative, and engagingly presented by a true master of the teaching art.

It is a course, in short, for the “seeker” in you, designed to satisfy your need to know, your willingness to self-examine, and your restless curiosity about the world around you.

In fact, the array of ideas, cases, and issues you encounter is so remarkable, embracing so diverse a spectrum of thinkers and subjects, that you might find it hard to believe you’re taking just a “psychology” course.

Some of What You Will Learn

Lecture by lecture, Professor Robinson navigates from one subject to the next, and you follow along as he recreates a Platonic dialogue; explains brain physiology; or explores the intricacies of middle ear construction, the psychological underpinnings of the Salem witch trials, and the history of the insanity defense.

Among other things, you learn:

Professor Robinson explains how the different traditions of psychology and their rich intellectual histories relate to the “great debate of the ages” about being, knowledge, freedom, and the sources of and standards for human conduct.

Thus you learn how the three great intellectual traditions of materialism, empiricism, and rationalism—each one an answer to the basic questions of being and knowledge—powerfully influence the theory and practice of psychology to this day.

But you also learn why Homer, Socrates, Plato, Aristotle, Locke, Hume, and Kant must also be counted among the founders of psychology.

An Exceptional Range of Brilliant Thinkers

And that’s only a small sampling of the exceptional range of brilliant thinkers whose ideas have contributed to the subject of this course.

You encounter these great minds as you:

As Professor Robinson remarks at the end of that particular lecture, “If you don’t have at least one sleepless night over these possibilities, then I’ve been less than clear.”