Delivery : Instant Email Delivery
Van Tharp – Infinite Wealth Course is digital course. We will delivery via your email with download links. You can online access with smart device or download to personal computer. 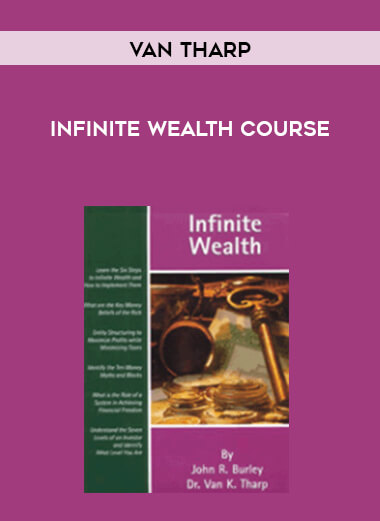 In the mid-1990s, I decided to start modeling wealth processes. What was true wealth?  What did it take to become wealthy? I started asking traders if they were wealthy and ironically, just about every one of them said “No, I’m not wealthy”— no matter how much money they had.  When I asked each of them to define what it would take for them to become wealthy, can you guess how they answered that question?  Almost always, wealth meant having about 10 times more money than they already had—regardless of their net worth at the time. If they were worth $10,000, then $100,000 would make them feel wealthy, but if someone was worth a million, then he or she’d need $10 million to feel wealthy.

Strangely enough, if you put ten times your current net worth to work at a reasonable rate of return, you could earn your current net worth every year.  Wouldn’t that make you feel wealthy?  Well, people don’t tend to realize that or think that way, so that really got me thinking about the concept of wealth.  Maybe wealth had nothing to do with how much money you have. Perhaps it really has to do with freedom and the ability to live without having to work.  After all, what good is living in a $10 million dollar house if you need to make $2 million before taxes just to pay the mortgage bill on it – that’s a real problem, not real freedom.

Also around this same time period, I played Robert Kiyosaki’s Cashflow 101 game for the first time. I was stunned! Although I had already modeled multimillionaires, suddenly I was learning many new things that I had never even thought of or heard about before playing that game. What I learned changed my life. Following the plan I developed from those ideas, I became “infinitely” wealthy very quickly– all while I maintained my standard of living. And you can do it too.

The strategy is easy to teach and to follow so I decided I must teach it at a workshop.  For the first three times we held the workshops in 1997, Robert Kiyosaki co-taught the Infinite Wealth Workshop with me.  That arrangement ended, however, when he became famous after his book Rich Dad, Poor Dad came out.  I continued to teach the workshop for several years with a number of different guest speakers over the years. After a while, however, I realized that we were spending a lot of time and energy focusing on infinite wealth and not enough time supporting the needs of our core customers – traders.   Over time also, some of the techniques that our guest speakers had taught were no longer viable as the economy, markets, and regulations changed.  We stopped teaching the Infinite Wealth Workshop in the early 2000s and refocused our company on traders

Since we stopped teaching that workshop, we have continued to touch upon some of the wealth principles here and there at our trading workshops. Many of the core infinite wealth principles from the original workshop, however, remain highly relevant (yes, relevant for traders) and those principles have also remained very valuable.  In addition, I have gained more insights into the concepts of wealth and now believe that building real wealth is an inner process – not primarily an external one as I had thought before.  I have been studying a lot about this in the last year or two and what we have developed is exactly what most traders need.

As a result, I am bringing back Infinite Wealth in 2016 in which I will emphasize the psychological principles of wealth rather than any technical strategies. Specific strategies can change over time, and most people fail to follow them anyway. But if you have inner wealth, then outer wealth becomes easy.  The psychological principles of wealth or inner wealth, however, remain constant and actually, they will lead you to the “right” technical strategies.  We will call this course the “New Infinite Wealth Workshop,” and it will be one of our core workshop offerings.

Think about the following for a moment:

Where are you at the moment?

–   Do you feel like you are on a treadmill going nowhere? Imagine what it would be like to never have to work again.

–   How would you spend your days?

Anyone can achieve infinite wealth – no matter what your income is or how old you are. In fact, we know of minimum wage workers who became infinitely rich while never earning more than the minimum wage. To achieve this status, those people needed to learn to make new choices about how they were going to lead their lives, and they needed the discipline to carry out their choices.  You can learn about those choices and what it takes to follow them through.

Does this seem hard to believe?

It did for me too initially.  I had been working for a long time and trying to build my net worth. When I learned about the infinite wealth strategy for the first time in the mid-1990’s, I still had lots of debt. I had a positive net worth, but from a financial standpoint, I still had to work at my company to earn the paycheck.  After grasping the power of infinite wealth principles, however, I completely rearranged my financial situation over the next six months and reached a position where I didn’t have to work anymore.  Now I love what I do, so I have continued my work even though I’m past the normal retirement age.  My point is that I am financially free and I don’t have to work – I choose to work.  I want to show you how to do this in the new workshop — and help you achieve it easily by focusing on your psychology around wealth.

This is your personal invitation to join a group of elite people who want to build infinite wealth. The infinite wealth strategy is actually contained on this page. You’ll want to read every word because it will change your life.

Here’s the Essence of the Infinitely Rich Strategy:

Let’s adopt the definition of “rich” from R. Buckminster Fuller, the great thinker, and inventor of the twentieth century. “Bucky,” said that if you stopped working today, you could determine how wealthy you were by how many months you could survive without changing your lifestyle and without working again. For example, if you had monthly expenses of $3,000 per month and you had $10,500 in assets, you could last three and a half months. As a result, you would be 3.5 months rich. And, of course, by Bucky’s definition, if your monthly wealth is bigger than your remaining lifespan you are infinitely wealthy.  However, there is a better way to become infinitely wealthy.

The key to being infinitely rich— not having to work ever again— is to have assets and passive income (income you get without working) that are equal to or greater than your expenses. In the example given above, if you had assets that gave you $3,000 per month in passive income, you could last forever. You would, therefore, be infinitely rich. For example, if you had $300,000 and you got a 1% return on your money each month from say dividends, then you’d be infinitely wealthy.

There are four basic ways to achieve infinite wealth by this definition:

These techniques and procedures are very simple. Anyone can become infinitely wealthy in about five years—no matter what your age or your income—just by following these simple steps. But few people do. They are in the “rat race,” always struggling to pay this month’s bills. And, that’s why is so important for you to get the right plan and rid yourself of personal blocks to following them right now.

I also think that almost everyone can find strategies that bring in passive income and we’ll give you some good examples of how to create money out of nowhere. But most people do not have the psychology to implement these principles.  As a result, we are going to help you achieve inner wealth in this workshop so that you will experience outer wealth as a result.

10.You’ll learn to rethink your finances. Some of you could be infinitely rich within a year.