Delivery : Instant Email Delivery
Xande Ribeiro BJJ Library Xande No Gi Passing System is digital course. We will delivery via your email with download links. You can online access with smart device or download to personal computer. 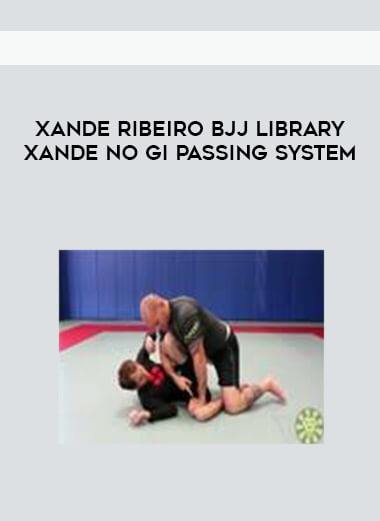 Xande covers how to behave against the double under butterfly clinch, how to break the hold, and how to force the half guard.

Following our opponents reaction we may be unable to complete the opposite side smash and need to settle for the forced half guard.

Xande teaches how to adapt your side smash against the knee shield or three quarters guard. By using your opponent’s reaction, we divert the leg to kill the frame and pressure their leg to find the side smash position.

In this lesson Xande begins to piece the previous few lessons together with another transition. This time we start with a side smash pass attempt then transition into the opposite side half guard instead. By having multiple options for each scenario, it allows us to react with the best possible response based off your opponent’s actions.

Xande teaches how to force the half guard off of a failed or attempted side smash pass. Sometimes your opponent may have a very good open guard and defense against your passing attempts. If you’re having trouble with the pass, it may make for a better opportunity to pass to force the half guard guard game which they may not be good at.

Xande No Gi Passing System 8 – Side Smash Posture from Headquarters

Xande goes into detail on how your body should be positioned and applying weight to your opponent from the headquarters position to transition into the side smash pass. We learn that your body must compensate for your opponent’s actions in order to apply the right pressure throughout the pass.

Xande No Gi Passing System 7 – Transition to Side Smash Pass

In this lesson Xande teaches how to transition into the side smash pass. He explains that you can often transition into this pass off of a failed double over pass when your opponent begins to push your body away with their hands or their butterfly hooks. The side smash pass is a very versatile pass that can be found in many situations and used to chain your combinations of passes together in an effective way.

Your opponent may effectively control your hands to prevent you from getting a good grip from the double overs and to stop the stack. In this case Xande teaches how to transition into a single over pass to focus more on total hip control without getting a deep stack to make your pass.

Sometimes it will not be possible to get a deep stack with the neck grip as shown in the previous lesson. It’s also possible that your opponent may begin posting on your body to push you away as you’re making your double under pass attempt. In that case, Xande teaches a shallow hip grip that can be used complete the double under stack pass.

Xande teaches the traditional double under pass with a hip stack to pass your opponent’s guard. This guard pass goes well in combination with the previous three lessons in this series.

Often times it can be very difficult to control your opponent’s hips enough to go straight for the pass. In many situations you may find it easier to force the half guard first to work your guard passes from there. In this lesson Xande teaches how to force the half guard super hold grip and then transitioning into the esgrima pass.

Xande utilizes the same pass as the previous lesson but often times your opponent may push your head and stay strong with the hooks to defend the pass. In this case, we transition to the shin control to find our way around the hooks for the pass.

Xande shares one of the first no gi passes that worked really well for him during his transition from gi to no gi. The double over leg squeeze pass combines the right element of pressure to consistently control your opponent’s hips to make the pass.